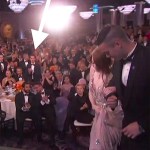 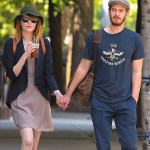 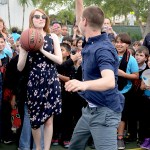 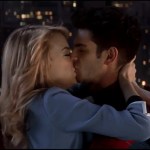 True love always finds its way back! — And, that may be the case for Emma Stone and Andrew Garfield! The exes were reportedly spotted getting cozy on a dinner date in NYC on May 23! Are they back together for good?

Emma Stone, 29, and Andrew Garfield, 34, may be giving love another try! The exes were spotted at Dell’anima restaurant in New York City’s West Village on May 23, a source tells Page Six. “They were talking and sitting very close,” the insider, who also says they ‘looked like a couple’ reveals. “They were laughing and smiling. They both seemed happy.” Garfield is currently in New York performing in Angels in America on Broadway. Meanwhile, Stone is also in the city shooting Netflix’s Maniac.

So, are Stone and Garfield back together? While there’s clearly no bad blood between the exes, they are just friends at the moment, according to the site, which says they’ve been on good terms since their breakup. Stone and Garfield split back in 2015 after three years of on-and-off dating. They were also spotted spending time together in London last summer when he was there for his film, Angels in America. The exes have admitted before that despite their split, they still love each other.

Before he reportedly went to dinner with his ex, Garfield appeared on The Late Show with Stephen Colbert where he got candid about his first kiss… with 30 girls. “I was 13 I think,” Garfield said of when he had his first “french kiss.” He  explained, “As the hormone monster came into my life, I went to a co-ed school at the age of 12, 13… This girl named Dorra… she changed all our lives.” Garfield went on to explain that her parents were away, so about 50 young boys and girls went to her house. “It was like a scene from ‘Braveheart’ where the Scottish and the English are just — They just start charging at each other and they just — just like tongues out… And I think that night I kissed 30 women — girls,” Garfield admitted.

Meanwhile, Stone has also been spending time with newly single, Justin Theroux, 46, who recently split with Jennifer Aniston, 49, in early 2018. The actor was most recently seen leaving a Met Gala afterparty at Up & Down Club with Stone on May 7 in NYC. Just a few days before the Met, the two were spotted grabbing dinner together in the city, where Theroux is also filming Maniac alongside Stone.