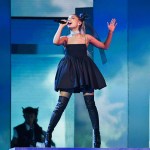 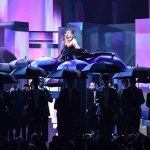 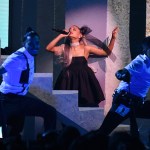 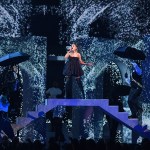 Okay, history was just made! The K-pop group BTS just met Taylor Swift and the photo is simply the best thing EVER! Take a look!

What’s better than seeing pics of your favorite celeb roaming around backstage at a huge awards show like the 2018 Billboard Music Awards? Two of your fave artists meeting up and commemorating the moment with a pic for their fans to freak out over! And that’s exactly what went down when everyone’s favorite pop star, Taylor Swift, 28, crossed paths with everyone’s favorite K-pop act, BTS! The “Look What You Made Me Do” songstress captioned the snap, “BTS Forever,” along with some heart emojis! How amazing would a collab between Tay Tay and BTS be!?

However this wasn’t the only unforgettable moment from the awards show that Taylor had a hand in! During the show’s opening, Kelly Clarkson performed a medley of the tracks up for honors at the show. Among them was “LWYMMD,” and while she sang the track, Taylor was giving a snarling glare! However, she soon burst into laughter! So, although she initially looked kinda perturbed, we think she was just enjoying her amazing single!

Speaking of incredible backstage moments (that include Taylor, naturally), the songstress performed in LA on Saturday, May 19, and afterward Amber Rose and Wiz Khalifa took their son Sebastian to meet her! As fans know, Sebastian is a HUGE Taylor fan. The adorable 5-year-old brought her a bouquet of flowers, which she accepted before giving him a big hug! “Thank you @taylorswift you have made my baby the happiest lil Pumpkin ever!” Amber captioned a photo of Sebastian with Taylor. We are living for this precious moment!

Fans will remember that Taylor sent Sebastian tickets to the show along with VIP passes after Amber shared a video of the youngster happily singing along to her music. One thing is certain, Taylor takes good care of her fans!