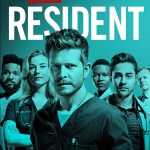 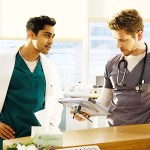 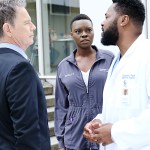 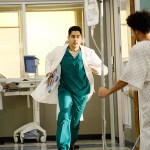 While Dr. Bell is looking to hire a new surgeon, Conrad and Devon are rushing to save their friend and colleague after he falls off the hospital’s roof and crashes through a skylight. Get caught up on ‘The Resident!’

Dr. Bell is starting off his new gig as CEO by telling his board that he’s planning on hiring an acclaimed surgeon to Chastain’s roster. The boardroom is well lit, thanks to a skylight, but a dark figure above catches Bell’s attention. He watches in disbelief as one of his doctors, Bradley, crashes through the glass and lands onto the table with a giant shard of glass sticking straight out of his chest. Soon enough, Dr. Conrad Hawkins is rushing into the room, and quickly stops the bleeding so they can move Bradley off to the operating room. Will he survive? Here’s what you missed on episode 12 of The Resident!

Dr. Bell is trying to convince a star surgeon named AJ Austin to come work at Chastain. After some convincing, AJ agrees to take a tour of the hospital. The new CEO then tells Dr. Okafor that she will be conducting the tour since “talent recognizes talent.” When she ends up meeting with AJ, he tells her it’s unlikely he’ll come to Chastain. She takes this as an excuse to leave, but he asks where she’s going. She tells him she’s going to assist a patient, Steve Berman, who broke his penis. This intrigues the surgeon, so he follows along.

The surgery goes well, and Steve is recovering nicely when AJ finds him again. He makes the patient unlock his phone and shows him a photo of him and his cats. He also tells him that if he ever wants to do something stupid again, he should picture AJ’s face, which he puts incredibly close to Steve’s. The patient says he won’t do it again.

Bell asks Okafor whether or not she thinks AJ would be a good addition to the team. She admits that AJ should be kept away from conscious patients, but that “unconscious ones will love him because he’ll save their lives.” Bell later finds the surgeon leaving the hospital, and tells him he’s willing to extend an offer for a full-time position. At first, AJ says he’ll pass, but after a brief discussion, he makes a request. “Dr. Okafor frightens me in wonderful ways. I want her to be my right hand,” he says. “My thoughts exactly,” Bell responds.

Conrad and Devon Try To Save A Fellow Doctor

Dr. Bell is convinced Bradley had mental health issues and believes the fall was a suicide attempt. However, Devon isn’t too sure. Devon is a close friend of Bradley’s, and they were even making plans earlier in the day to go on a double date with Devon’s fiancée and a nurse, who works with them. Between brain scans and surgeries of the patient, Devon and Conrad try to figure out what happened. They head up to the roof, and find an energy drink, which they knew their friend drank to beat exhaustion. This convinces them he didn’t jump on purpose since he wouldn’t be worried about being more awake if he was planning to commit suicide.

Dr. Okafor is assisting with Bradley’s surgery, while AJ observes. The surgeon takes issue with the way the doctor on duty is planning to operate, and the doctor begrudgingly steps aside to let AJ take over. Okafor then takes the glass out of Bradley and he begins hemorrhaging. AJ works quickly to suction up the blood and the bleeding eventually ceases and the vessel is repaired. They then begin to look for other injuries and find out that he had heart disease, which no one knew about or could have expected from a man in his 30s.

After the toxicology report comes back, Conrad finds out that Bradley had amphetamines in his system. He is then convinced that the energy drink, medication, and poor heart condition may have all become too much at once and caused Bradley to faint and fall off the roof.

Bradley wakes up and admits that he’s thought about suicide all the time. “I just wanted to escape the pressure, the anxiety, the exhaustion,” he explains to Conrad, Devon, and Mina. “Even just the thought of walking away from medicine brings this overwhelming sense of relief. It’s like a weight lifted off my shoulders… is that weird, or what?” Everyone says that they can’t relate, but that’s because they all genuinely want to be doctors, and it’s okay that he doesn’t. “Get out of this place and find what you do love,” Conrad tells him.

Nic goes to speak to Anthony Ewen, who used to be mentored by Lane Hunter in Nashville. He agrees to speak with her and tells the ex-nurse that one of Lane’s patients died of a chemo overdose. The hospital she was at then let her resign in exchange for silence. Lane went on to hire him at a clinic, and he confesses that he was loyal to her. But this time around, he began asking questions, and found himself with fewer hours and accusations against him of patient patient negligence. “The best advice I can give you is run… run away from Lane Hunter,” he concludes.

Nic heads to the medical board where she has an appointment to report Lane for malpractice to a woman named Denise. After an hour of waiting, the receptionist informs her that her appointment has been cancelled. She then sees Denise walking out of the building and attempts to call out to her. They make eye contact and then Denise continues to leave.

Nic begins to feel as if someone is following her, and Conrad begs her not to do anything until his shift ends. When she arrives home for the night, a man is waiting on her front porch with a grocery delivery that Nic didn’t order. He insists on giving them to her, and she takes them but threatens to call the police if he doesn’t leave her property. He wishes her a good night and calls her by her full name – Nicolette Nevin – despite her not introducing herself. She runs into her home and shuts the door.

Conrad later meets Nic at her house and asks if the man came back. She doesn’t think he did, and the resident tells her to get her things and come stay with him. While they’re talking, Nic feels frightened and Conrad comforts her. Someone hiding in the bushes then takes photos of the Nic and Conrad hugging!