Selena Gomez, 25, has made 2018 her year of hair transformations! And, can you believe that her shaved undercut, which she debuted on April 23, was “an impulse decision”? In fact, Selena’s new do’ was “all her idea,” LA hairstylist Tim Dueñas, who is responsible for the buzz, told Page Six. After Dueñas shaved the back of Sel’s head, it was her personal hairstylist Marissa Marino who then paired the new cut with a slicked-back, ponytail braid.

While the haircut would’ve been huge decision for some, it didn’t take much time for the singer to give it a go. “I asked her, ‘Well, how long have you been debating it?’” Dueñas explained. “And she said, ‘[Since] last night!’ She was like, ‘When I want to go for something, I do it.’ I think she just wanted a change.”

The hairstylist also revealed that Sel’s new look took “10 minutes, max” to create! Nonetheless, it’s going to take a lot longer than that to grow back. As for exactly how long it will take for the bottom of her shaved roots to grow out? —  “About a year, depending on how fast the hair grows,” Dueñas admitted.

But, Sel’s in luck. Dueñas, a pro at customizing hair to be ever-changing, as he more than likely understands that his high profile clients are forced to change up their look for work, had a trick up his sleeve when he shaved Sel’s head. “With those low corners, you can’t even tell [the undercut] is there,” he explained. “It leaves her with a lot more versatility in how to wear her hair; she can wear it down, she can do a ponytail. You kind of have to think about all the options for her!”

It comes as no surprise that the “Wolves” singer would take such a risk with her hair, as she’s changed it up quite a bit this year. And, it’s only April. She’s rocked long locks, platinum blonde hair, a bob and even bangs. But, we have to say, Sel’s most drastic hair transformation yet has been her shaved undercut. We can’t wait to see her hair evolution throughout 2018! 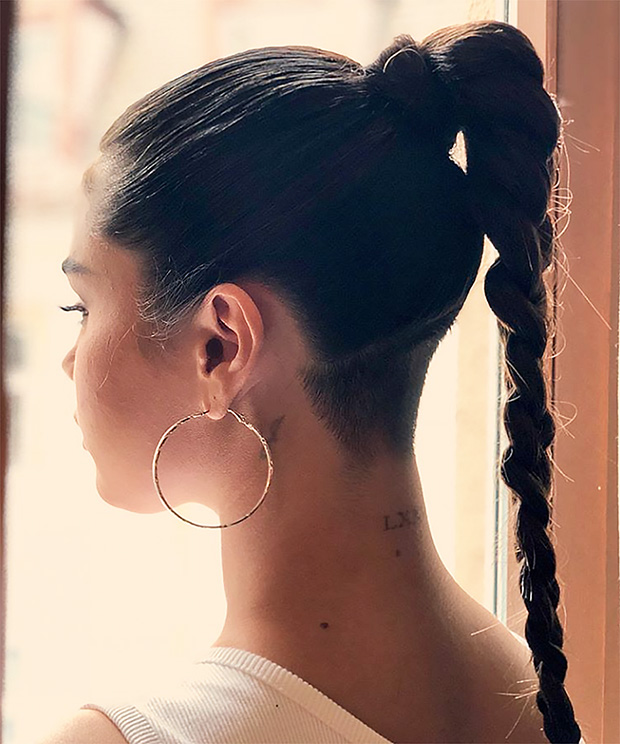 Before Dueñas revealed the story behind Selena’s new hairstyle, HollywoodLife.com had previously revealed that her decision was based on impulse. Selena’s been a proponent of making sure her health, both physical and mental, is at the forefront, especially after her lifesaving kidney transplant, which she underwent in Summer 2017. — And, that was part of the reason she decided to make the change. “It felt really empowering to undergo such an edgy change to her hair,” a source told us. “The new style makes her feel powerful, and cool, and she loves it.”