Omg! Carrie Underwood FINALLY revealed her wild scar after tragically falling last year — and you won’t believe it! See her face after she needed 40 stitches.

Carrie Underwood, 35, is finally ready to talk about the fall that caused her to take a hiatus from the spotlight. The singer “fell” back in November 2017 and suffered a broken [right] wrist and significant facial injuries, which required surgery and more than 40 stitches. Below is the first close-up photo where her scar is actually visible. The scar — as seen below her nose, moving into her lip — is faded in the photo.

Here’s Carrie’s explanation as to what really happened: “I fell down… I was taking the dogs out and I just, I tripped,” the country star said on iHeartRadio’s The Bobby Bones podcast. “There was one step and I didn’t let go of the leashes. Priorities! — So, that’s why my left hand is fine. But, I went to catch myself and I just missed a step. If I had fallen anywhere else I would’ve been perfectly fine. But, there was one step that messed everything up.” Carrie said she fell and was injured “around my mouth.”

“It set me back,” Carrie admitted. “The most frustrating part was trying to work out with a broken wrist and how much it can throw off your world, having an appendage that is there, but you just can’t use.”

Carrie spoke of her healing process and said she’s been “fortunate” throughout her recovery. “I was lucky that when it happened, everything was kind of shutting down in the music world and we had the holidays and stuff like that,” she explained. 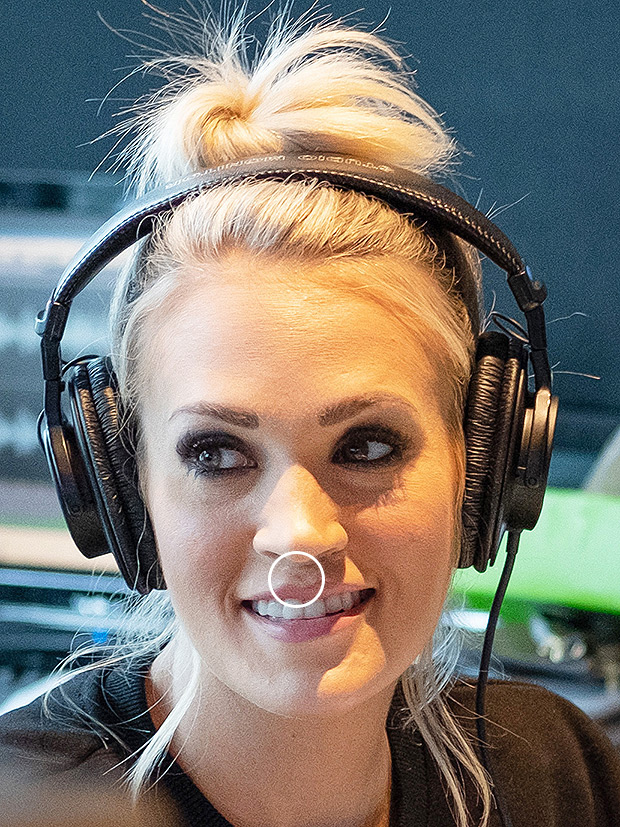 Carrie Underwood stops by the Bobby Bones Podcast after her 2018 Academy of Country Music Awards performance on April 15.

She later addressed a statement she wrote to fans in a blog post back in January 2018, which read in part, “When I am ready to get in front of a camera, I want you all to understand why I might look a bit different.”

After her fall, Carrie “was at a point where I didn’t know how things were going to end up,” she told Bobby Bones. “I didn’t know what was going to go on. I didn’t know what it was going to heal like,” which is why she had to write the blog post. “I felt like it was important to me, as I started resuming my life again, and going to the grocery store and taking my kid to school and stuff like that I was like, ‘Ok, someone’s going to creep on me at the grocery store and people are going to be like, what happened and post it on Instagram,'” she explained.

The singer’s official return to the spotlight was on April 15, when she performed her new single, “Cry Pretty” at the 2018 ACM awards.

Carrie’s interview came after she announced the release date of her new album on Wednesday, April 18. Cry Pretty, which is also a single on the album, will be available on September 14.