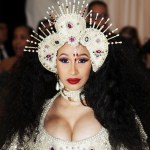 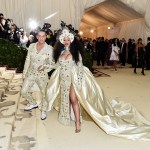 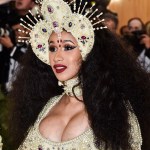 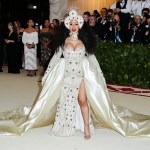 Cardi B isn’t ashamed of her past, despite what the haters say! In a brand new interview, Cardi reveals she loved stripping because it helped pay for her apartment, her ‘boob job’ and ultimately, her rap dream!

There’s one guaranteed thing you can’t take away from Cardi B, 25. The Bronx rapper has always kept it real. She’s rapped about her upbringing and her stripper past; She’s openly admitted to her gang relations. — The bottom line is, Cardi’s not ashamed of her life before fame. The “Be Careful” rapper told Ellen DeGeneres, 60, that she had to put her music dreams on hold to pay her bills, so she turned to stripping. “I always wanted to be an artist, I just gave up on my dream because I felt like, ‘My is not paying my bills,'” she told the talk show host on an episode which airs on April 19. To make money, Cardi said she turned to stripping for about three and a half years.

When Ellen asked if she liked stripping, Cardi proudly replied, “Hell yes I did!” — “A lot of people want me to be like, ‘Oh, I hated it. I don’t recommend it to nobody,'” she explained. “I don’t recommend it to anybody, because it’s not for everybody. But, it made me money. It paid my bills. It got me my own apartment. It got me my boob job. I had about $20,000 when I was 20-years-old already and it just helped me a lot, you know?”

After Cardi’s dancing gig scored her enough money to live comfortably, that’s when she decided it was time to get back to her dream. “I made the transition [to rapping], because I started getting a lot of money,” she admitted. “And, the money I made, I used it to invest in my dream.”

Then, Ellen touched upon the ongoing debate that Cardi’s 2-year stint on VH1’s Love & Hip Hop: New York helped catapult her to fame. However, Cardi set the record straight. “You know, I already had like a million and something followers on Instagram,” she said. “What helped me was my personality. My personality took me places. Who would’ve known?”

Cardi’s new album, Invasion of Privacy, contains tons of lyrics that reference her life before she shot to stardom. One track in particular, titled “Best Life,” which features Chance The Rapper, 25, sums up Cardi’s thoughts about her career journey. Take a look at some of the lyrics:

I said I never had a problem showin’ y’all the real me … / Way-before-the-deal me, strip-to-pay-the-bills me… / But never did I change, never been ashamed / Never did I switch, story stayed the same … / Went from small-ass apartments to walkin’ red carpets / Pissy elevators, now ever dress is tailored;

During the interview, Cardi and Ellen also discuss her Saturday Night Live performance, where she revealed her pregnancy; Her Coachella debut last weekend and her fiancé, Offset, 26.