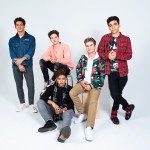 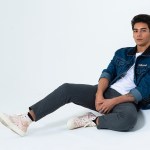 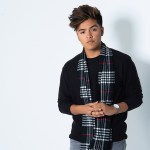 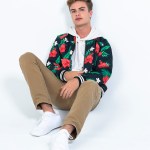 You might know In Real Life as the finalists from the ABC show ‘Boy Band,’ and they’ve been putting out one catchy pop song after another. Here, the hugely talented guys about their new music and more!

Together, Brady Tutton, Chance Perez, Drew Ramos, Sergio Calderon and Michael Conor make up In Real Life, one of the best new pop-rap bands to come up in the past year. Here, we chat about their new single “Tattoo (How ‘Bout You)” as well as some music that hasn’t been released yet! Click through the gallery, attached, to see pics of the band from our exclusive photo shoot.

How did the band name come about?

Michael Conor: Towards the end of the season of Boy Band, we were trying to figure out what a good final band would be. We were presented with five options, and I remember one of the options was “Wild Five.” And we knew when we read that, that that’s not what we wanted to go with. There were some other options but the one that stuck out to us was “In Real Life.” Coming from reality TV, just the concept behind it, I think we were all intrigued, so that’s the one we went with.

How do you feel about the “boy band” label?

Sergio Calderon: Being in the boy band category is really cool. These past few years, it’s kind of like this new generation, this wave of boy bands, and everyone is different. No groups are trying to be the same, or copy each other or whatever. So it’s cool that we all kind of get to be our own thing and just do what we love.

Drew: I think there are definitely a lot of preconceived notions that come with being in a boy band. That’s why it’s so important to have originality. And that’s why I love this band, because there’s a lot of diversity and a lot of really cool influences going into it.

Do any of you have special talents that you have now gotten to display?

Chance Perez: I can make a trumpet sound. [Makes impressive trumpet sound] We do a really good Game of Thrones theme song with it.

This is being wasted on an audio-only interview. That’s so good. You have to do a covers album or some mixtape.

Sergio: That’d be so lit.

What’s best part about getting to be together in a group?

Michael: We do so much and we can’t imagine doing it on our own. Like the amount of rehearsals we do…I feel like you’d be so lonely. You have other guys to rely on like, “Yo, am I doing this move right?” But if you’re by yourself it’s just you. We can just rely on each other and help each other and just become the best we can be.

You’ve got that built-in support. What about the challenges of being in a group?

Sergio: It happens in rehearsals with like dance moves or even singing. There are also personal things that, you know, everyone goes through things. But we talk it out, and if you’re not comfortable talking with one person you can talk with the other or the rest of the group or whatever. So that’s, yeah; that’s the beauty of being in a group. You just feel comfortable with the rest of the guys and help each other out like that.

Brady: We all have weaknesses in different situations. For example, I can never remember lyrics on stage for whatever reason. And then some people have a hard time remembering to bring their suitcase, or of course it gets lost! I feel like we all are very childish in some ways. Again, that’s why it’s dope to be in a group because we help each other out.

What’s the story behind “Tattoo (How ‘Bout You)?”

Chance: “Tattoo” is basically a metaphor for when you’re in a relationship. And you’ll do everything you can to make it work because if it’s the right person, you want to be with them forever. So, it’s kind of the same thing with the tattoo. A tattoo is going to be on your body forever, so you’re not going to want to change anything about it. You want it to be the best it can be.

You have another new song “How Badly” coming at the end of the month. Can you take us through that one?

Sergio: It’s really cool. We just felt so good about it. It’s a bop, but it also has everything. This is the first song that we’ve ever recorded that actually has all the elements that we have in this band. It’s cool. Each part showcases each guys’ [talents]. There’s rapping. There’s Spanish in there, it’s kind of like sexy. It shows off all of our strengths.

Do you want to do a full-length album someday?

Drew: Yeah. Right now, we’re playing singles, because that tends to be what’s hot and poppin’. But at the end of the day we do want to put together some full body of work that will represent us all.

Michael: We’ve recorded a lot of songs. When it comes to putting together; whether it’s going to be an album or an EP, that’ll be later on. We’ll sit down and listen to them and pick our favorites and kind of go with it.

I know you have a couple of tour dates coming up. Can you tell us what’s in store for you this summer?

Chance: It’s going to be a lot of fun. We have a couple of those lined up and we’re just having fun. We’re going to these festivals, trying to get some new fans and try to show people who we are.

You’re also very involved with charity, and just performed at T.J. Martell Foundation’s Family Day on April 8. What was that it like to be a part of that?

Drew: T.J. Martell was an amazing person. Before he passed away, he left behind something that’s making a positive impact in the world. The foundation has raised over $280 million in the fight against cancer. The NYC event that we went to, they’ve raised over $5 million dollars for cancer research over the course of running the event, and to be a part of something that big is really cool. Everyone is affected by cancer and it was just a great feeling to know that we were helping.

Michael: Yeah. Adding on to the legacy.

Brady: We’re really blessed to be with Hollywood Records because they work with a lot of really cool charities. And they do a lot of those events. So that’s really cool to have those opportunities and go to these shows.

Michael: It doesn’t matter how big we get — we’re always going to be down to do it.

Finally, what’s a memorable gesture from a fan that you had recently?

Drew: One fan knows that I’m really into PlayStation. So she got me a custom PlayStation controller with my username on the middle of it. It has like cool lightning effects around it and stuff like that.

Chance: I got this ring from a fan, with a lifeline in a heart on it. Our fans are called lifelines. And two girls got my name tattooed on them!

Brady: Do you know what WaWa gas stations are?

Brady: So, they have these chocolate milks that are like Cookies ‘n’ Creme milk, and they only sell it there. A fan I used to talk to all the time lives in New Jersey and he was telling me about them. I was like, “Oh my gosh, it’d be really cool to have this.” We were in Detroit, and a girl woke up at 2:00 AM, bought them, and drove to [our show in] Michigan with like eight of them in her car. It was like 12 hours. She made it to our meet and greet. That was impressive.

Sergio: But it’s not just the gifts, it’s like, they make videos of everything that we’ve done. They make little books and stuff. And they help spread the word out. There are these fans in the Netherlands and I saw a video where they like print put promo stuff and posted it all over. We have the best fans in the world.

Keep up with In Real Life here.