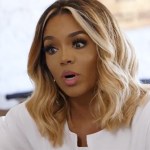 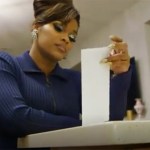 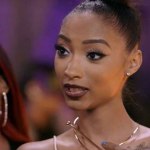 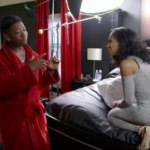 The tea has been spilled on an all-new episode of ‘Love & Hip Hop: Atlanta’, when Karlie finds out her estranged husband has a baby with another woman. Plus, Erica meets her girl crush, Tommie!

The drama was too real on the March 26 episode of Love & Hip Hop: Atlanta! To start, Karlie found out that her estranged husband, Shooter, has a child with another woman — and a second on the way. Erica Mena revealed she has the hots for Tommie Lee, but her pursuit didn’t go as planned. Plus, Rasheeda finally confronted Kirk about his paternity test results after Jasmine had the audacity to reveal the truth to her mom, Shirlee, and Kirk’s daughter, Kelsi. That’s the short version, but you’ll find the full recap details when you keep reading!

We pick up with Jasmine inside Rasheeda’s store talking to Shirlee and Kelsi. She reveals that Kirk finally took a paternity test and that her son definitely belongs to him. Shirlee goes off on Jasmine, but Jasmine takes it in stride and reveals that she just wants to talk to Rasheeda so they can has things out. According to Jasmine, her biggest concern is that her son won’t be able to be apart of the family he belongs to. When Shirlee tells this to Rasheeda later on she’s obviously upset that she wasn’t able to delivery the paternity news to her family herself. Because of this, she decides she does not want to speak to Jasmine any time soon.

When we meet up with Erica she’s hanging out with her friends, including party promoter Melissa. She tells them about the argument that went down when Stevie J brought her into the studio and told her friend and his artist, Estelita, that he wants Erica to be the new face of his label. While this is happening, Estelita goes to meet with Stevie’s ex, Mimi, and tells her everything — including how she first met Stevie. According to Estelita, Stevie slid into her DM’s on Instagram and offered to fly her out to Atlanta to talk business. He had her stay in his house, too, and in the middle of the night came climbing into bed naked to have sex. Estelita opens up to Mimi about everything she had been through before she met Stevie, including being abused and raped by men from her past, and claims that she believed Stevie J when he said he saw something special in her. Now she feels used and betrayed, and rightfully so.

Melissa throws a huge party to welcome Erica to the ATL, which almost everyone goes to. Erica’s one guest request was Tommie Lee, and when Tommie showed up Erica couldn’t contain herself! She told Tommie that she moved to Atlanta because she heard Tommie wouldn’t date anyone who wasn’t from there, which throws Tommie off. She’s clearly not into Erica’s advances, and she tells the confessional camera that she isn’t interested in getting involved with another woman after what Joseline put her through. Once Erica finally gets the hint she backs off a little bit and decides to invite Tommie out for a proper date. Tommie agrees, but it’s unclear if she’ll actually show — especially whens he dips out of Erica’s party when she isn’t looking. Ouch!

Of course Estelita shows up, too, because why  not? Estelita and Erica go somewhere quiet to talk about what happened in the studio with Stevie J, and that’s when Erica tells Estelita she only went to the studio to make sure he wasn’t taking advantage of Estelita. This is clearly not true because Erica has told her friends, including Tommie, that she wants to make a banger with Stevie. Unfortunately Erica falls for it and the two are able to squash their beef for now. Erica even offers to help Estelita get out of her contract with Stevie, but what are her intentions?

Lastly with Erica, Tommie shows up to see her the day after the party. The two women have a nice sit down and Erica apologizes for being so aggressive but hopes they can be friends. Tommie is into this so long as Erica doesn’t make it weird. Will these two be able to be just friends, or is Erica still going to try and get into Tommie’s pants? Hmm.

When we get back to Rasheeda, she’s invited Kirk over to talk with the family about his son with Jasmine. It’s his daughter, Kelsie, who confronts Kirk about the baby boy and tells him about Jasmine delivering the news before he could. This pisses Kirk off just like it did Rasheeda, but for now he has to focus on telling his family the truth. He does, and he also promises to work things out with Jasmine so that his son can be a part of the family like he should be. However, Rasheeda makes it clear she does not want Jasmine anywhere near her family… which could make things difficult.

Lastly, Sierra introduces us to her new man, BK Brasco. She’s finally working on getting divorced from Shooter who cheated on her with her assistant, Moriah. While Sierra is chatting with Karlie and their friends in the salon, Karlie reveals she’s dating BK’s friend, Sean Garrett. Small world in Atlanta, huh? But, one of Sierra’s employees quickly rains on everyone’s parade by revealing that Sierra’s ex, Shooter, has an illegitimate baby boy with another woman. That’s not all — she also reveals that there is a second baby on the way! Shan, the stylist, has been keeping this from Sierra because she didn’t want to upset her, but the whole thing sets Sierra off on a tirade. Once Sierra finds out that Shan knows this because the woman comes into the salon to get her hair done she fires Shan on the spot. Girl, bye!