THIS IS HUGE!!! Selena Gomez, 25, has let the world know that she so happy with boyfriend Justin Bieber in a Instagram 24th birthday message and even seemed to give a mic drop at the end of it. On March 1, she posted a photo of herself with her legs up and giggling, pointing to a Polaroid pic covering her face that seems to show the Biebs. She captioned the pic: “March 1, 1994 someone I know that happens to be super cool was born. Boom.” Are you kidding us?!? This is such amazing news for Jelena fans everywhere as her 134 million IG followers erupted with joy after some confusion.

You see, Sel deleted the initial post just a few minutes after putting it up. Was it a case of cold feet about finally making herself IG official with Justin again? A few fan sites managed to screen grab it and quickly send it around Twitter and she later ended up re-posting it for all the world to see. Jelena fans are FREAKING as within about 10 minutes it had nearly 400,000 likes already. Saying that her man is “super cool” and following it up with the ultimate exclamation point of “boom” is beyond epic in letting us know how special Justin is to her.

It’s also the best gift ever for Jelena fans, who flooded the comments section with “Now I can believe in love” and “😄damn it, I love you Selena! Thanks for that. Happy birthday our common friend 😄😙” as well as “Jelena is my life 🙌🏻.” Ever since Selena and Justin reunited in Oct. of 2017 we’ve been waiting for some kind of Insta confirmation from the lady herself that everything is right with the world again now that Jelena is solid. She finally gave us the news thanks to Justin’s Birthday. We’re sure he’s absolutely loving this adorable tribute to him. Click here to listen to our newest HollywoodLife.com podcast featuring all things Justin and Selena. 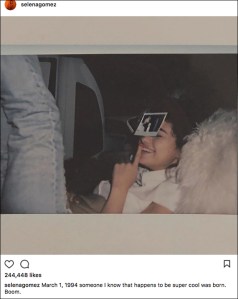