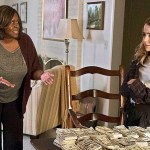 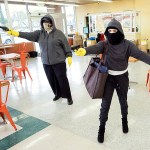 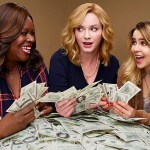 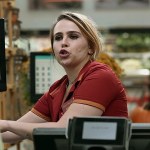 When Christina Hendricks, Mae Whitman, and Retta rob a grocery store, you know things are about to get interesting. These three fierce and talented actresses unite in the new NBC dramedy Good Girls. They play Beth, Annie, and Ruby, three moms who come to the conclusion that robbing a grocery will solve their money problems. Beth is a mom of four small children, who is also dealing with a cheating husband (Matthew Lillard) and the possibility of losing her home. Annie, Beth’s younger sister, is a single mom working at a grocery store. Her ex, Greg (Zach Gilford), is getting ready to sue her for custody of their daughter (Izzy Standard). Ruby’s vivacious and whip-smart daughter is sick and in need of medical care Ruby can’t afford.

At first, Annie brings up robbing the grocery store she works at as a joke, but the idea quickly turns into reality. The trio walks into the grocery with their toy guns and ski masks to get the cash. Unfortunately, Annie’s manager, Boomer (David Hornsby), sees her back tattoo as she’s grabbing the cash, which amounts to $500,000! After the heist, Ruby thinks they should all lay low for a while and not spend an exuberant amount of the cash, but Annie can’t resist. She goes out and buys a new Porsche and a laptop her daughter needs. Beth confronts her husband’s mistress and gives her $5,000 to leave town. She also kicks her husband out of the house. Ruby does end up going to a new doctor, who signs her daughter up for a new drug that could help save her life. Annie’s boss reveals that he knows she robbed the grocery store. He says he’ll keep his mouth shut if Annie has sex with him.

When Beth returns home, she finds three men in her house. Apparently, the money in the grocery store vault is their money, and they want it back with interest. And these guys don’t have toy guns. They have real ones. Beth, Annie, and Ruby frantically try to get the cash together, but they come up short.

Boomer comes back to Annie’s place drunk and demands sex. He tries to rape Annie, but Beth stops him. He calls her out for using a toy gun and swears he’s going to the police. Before he can leave, Beth hits him with a bottle of bourbon. When he stumbles back inside Annie’s apartment, he falls through a glass table and dies! Things just got a whole lot more complicated for Beth, Annie, and Ruby.

With actresses like Christina, Mae, and Retta at the helm of a show like this, it’s bound to be more than good. The Good Girls premiere set the stage for an exciting new show about three strong women who are willing to do whatever it takes to protect and provide for their families. It straddles the line between a drama and comedy, and that’s OK. Life can be funny, even in its darkest moments. All three of these characters are flawed yet completely relatable. They aren’t cookie-cutter by any means, and that’s why you can’t take their eyes off them. I’m excited to see what Christina, Mae, and Retta bring over the course of the season. From the premiere alone, this trio is a force to be reckoned with.

HollywoodLifers, what did you think of the Good Girls premiere? Let us know!