It’s no surprise the cast of Black Panther has exceptional chemistry on and off screen, but this takes things to a whole new level! Lupita Nyong’o, 34, honored her Black Panther co-star, Chadwick Boseman, 41, by recreating his shirtless Rolling Stone cover, which debuted on February 19. The actress went topless with a fur coat draped over her shoulders to channel her character, Nakia, just as Boseman went shirtless to channel his game-changing character. Nyong’o praised Boseman, calling him the king of the Black Panther cast, and credited him as a catalyst for the movie’s immense success. Click here to see photos from the Black Panther premiere!

“Imitation is the best form of flattery: @chadwickboseman I admire your quiet, confident, regal nature,” she wrote under a black and white, side by side photo of her topless next to his shirtless cover. “You brought the wealth of all your knowledge, wisdom and physicality to T’Challa. You led us into the land of Wakanda without ego, without pretense, without fear. We reap the benefits now squarely because of your courage, your fierce dedication, your intense passion, and your grueling workout regimen. And I will never get enough of the way you say the word ‘because.'”

“We celebrate BREAKING BOX OFFICE RECORDS with @blackpanther for many reasons, but chief among them is because we had you as our king. Enkosi Kumkani!! And congratulations on your @rollingstone cover. From someone who loves you,” she continued. 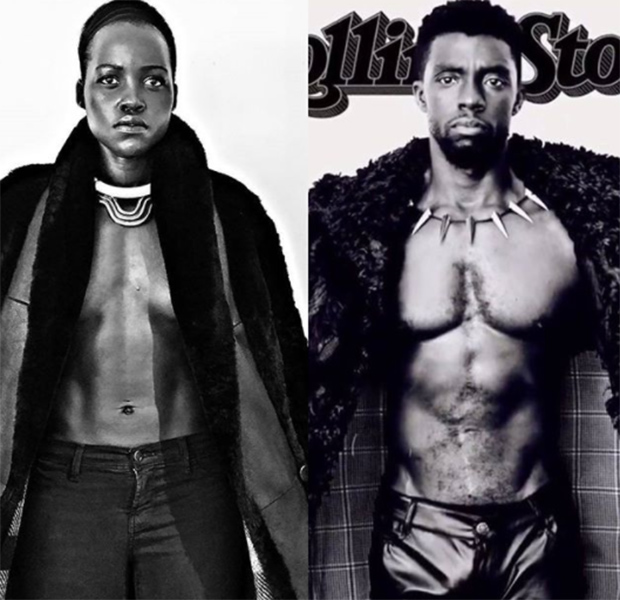 Boseman later responded to his Oscar-winning co-star with a sweet tribute of his own. “Lupita my sure footed dance partner, my beloved queen, my glory. You are one of the fiercest fighters I know. Not just on screen, but in real life,” he wrote. “Without your uncompromising determination we wouldn’t have the film that the world has so passionately embraced. You literally come to slay everyday. As evidenced by this side by side. How are you gonna do me better than me?! Thank you for the little details that make life more worth living.”

Nyong’o also recreated a shot from her Black Panther co-star, Michael B. Jordan‘s shoot with British GQ just one week earlier, where she too praised him.

Black Panther has changed superhero films having demolished the box office, bringing in an estimated $426.6 million worldwide and $241.6 million in North America alone — All in its first weekend. Not to mention, the film has completely shattered numerous records. Black Panther, starring Angela Bassett Daniel Kaluuya, Letitia Wright, and Danai Gurira, is in theaters now.

Related: ‘Black Panther 2’: The First Trailer & Everything Else You Need To Know

HollywoodLifers, have you seen Black Panther? — Tell us your thoughts about the film in the comments!