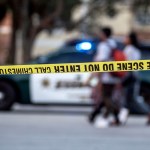 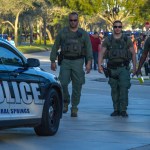 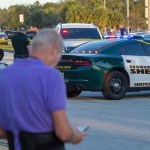 Seventeen high school students are now dead. At least 15 more were injured and all because America has decided that the right to own assault rifles is more important than protecting children.

This afternoon, just before the end of the school day, a former student at Marjory Stoneman Douglas High School in Parkland, Florida, armed with an AR-15 rifle, stormed in and methodically began massacring his former classmates. Videos taken by terrified students, who cowered on the floors of their classrooms, reveal the horror of what they endured for over an hour. Gunshots rang out over and over, victims were screaming and kids in the classrooms exclaimed, “Oh my God” and “holy crap.” Watch the video below. It was a war zone. But these are not trained soldiers. These are regular American teens, in a nice South Florida neighborhood, who went to school on Feb. 14 excited about Valentine’s Day. Instead, they found themselves at the mercy of an angry 19-year-old, Nikolas Cruz, armed with a semi-automatic assault rifle, multiple magazines of ammunition, and a determination to kill. Seventeen students didn’t make it out alive.

This is not right. This should not be allowed to happen in America in 2018. But it’s already the 18th school shooting of 2018 and we’re only 6 weeks into the year. Since January 2013, the month after the slaughter at Sandy Hook Elementary School, there have been at least 291 school shootings. Why are Americans willing to accept this? Why are American moms and dads okay with America’s lax gun laws when they can see over and over again that children in elementary, middle and high schools across the country have all become targets for shooters armed with military-grade weapons?

Any day, in any place in America, it could be their child who never comes home. Why are the “rights” of the gun owners to buy semi-automatic rifles, any time without even background checks, more important than the rights of children to safely go to school? And how about the rights of any American to go to church, or a mosque, or a concert, or a movie theater, or a mall, or a baseball game, or workplaces, or a night club to dance, without getting gunned down?

Let’s be very clear here. The NRA is not fighting for anyone’s right to bear arms in a well-regulated local militia, as the 2nd Amendment guarantees. The framers of our Constitution could have never envisioned automatic and semi-automatic assault weapons, like the AR-15 that was used by Nikolas Cruz, especially for purely personal use. The NRA is an organization funded by huge gun manufacturers like Smith & Wesson and Bushmaster Firearms. And it’s goal, like the goal of the gun manufacturers it represents, is to sell more guns and make lots of money.

Their mission is about making money. The NRA contributes millions of dollars to mostly Republican lawmakers to support gun-friendly policies and that means no restrictions on sales to anyone at any time. Donald Trump received $21 million from the NRA for his presidential campaign — more than any other candidate in history. And the NRA spent a record $36.6 million on the election in total, according to NBC News. No wonder Trump gave a speech to the organization in April of last year — the first sitting president to speak to the NRA since 1983 — in which he pledged to be a “true friend and champion” of the gun-promoting organization (and that’s not fake news), via PBS.

And so it’s no wonder again that the only thing that the president had to say (or rather tweet) about after today’s Florida massacre was: “My prayers and condolences to the families of the terrible Florida shooting. No child, teacher or anyone else should feel unsafe in an American school.” Trump has only “thoughts and condolences” to offer because he won’t do a damn thing to actually keep students safe. Thoughts and prayers were also all he had for the victims of the horrendous Las Vegas and Sutherland Springs, Texas, church shootings.

Florida Governor Rick Scott also has only “thoughts and prayers” and Florida Senator Marco Rubio said we shouldn’t “jump to conclusions” that some law could have prevented seventeen students from being shot to death in their school today, Feb. 14. The GOP won’t consider any law restricting access to any guns because they are in the pocket of the NRA. However, other western countries like Canada and the European nations have sensible gun control and their citizens are 25 times less likely to be killed by a gun. This also is not fake news.

So the bottom line: Americans, which do you cherish more — your guns or your children? You clearly have to make a choice. I pray that you choose your kids and start calling and calling out your congress people. It’s time to let them know. And if they refuse to support sensible gun laws that could help protect all of us, then, VOTE THEM OUT.

JUST IN (warning, disturbing video): Cell phone video inside the school as shots were going off at Marjory Stoneman Douglas High https://t.co/wHWo6XjccX pic.twitter.com/3ovf5LhzBs

HollywoodLifers, let us know what YOU think about what should be done to prevent more school massacres, below.