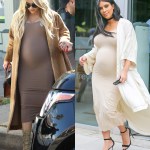 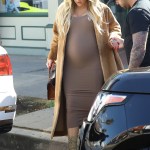 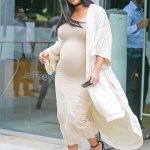 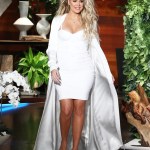 White hot! The Kardashian sisters are in a bump battle — both looked amazing while pregnant in all white. Find out more about Khloe’s newest look here!

“Another day, another SLAY,” wrote Khloe Kardashian‘s hairstylist Andrew Fitzsimons, and we couldn’t agree more! She seems to look better every day of her pregnancy! He posted this pic of the star on his Instagram on February 8. He styled her hair in a high, flirty ponytail. Her peaches and cream makeup was done by Hrush Achemyan. She had a hint of metallic POP under her brow bone, and her whole face was just glowing! She wore big silver hoops, which Khloe just admitted, she gets from Claire’s! “You guys have been asking, so I’m giving you all the details about my mega hoops. I always buy cheap pairs because I lose them so often. Claire’s and Nine West have become my go-to spots to stock up,” she wrote on her app. We love that she loves a bargain!

We LOVE that Khloe is wearing such form-fitting stuff during her pregnancy and showing off her bump. As of February 6, she was 29 weeks pregnant. Sis Kim Kardashian wore an all-white outfit while about 7 months pregnant with Saint West in October 2015, at the InStyle Awards in Los Angeles. The fact that Khloe can call her sisters for pregnancy advice is invaluable! So special. We think both ladies look amazing pregnant. It totally suits this family! Kim just had a third baby, Chicago, via a surrogate, and little sister Kylie Jenner welcomed her first child, Stormi, on February 1. It’s a Kardashian baby boom! 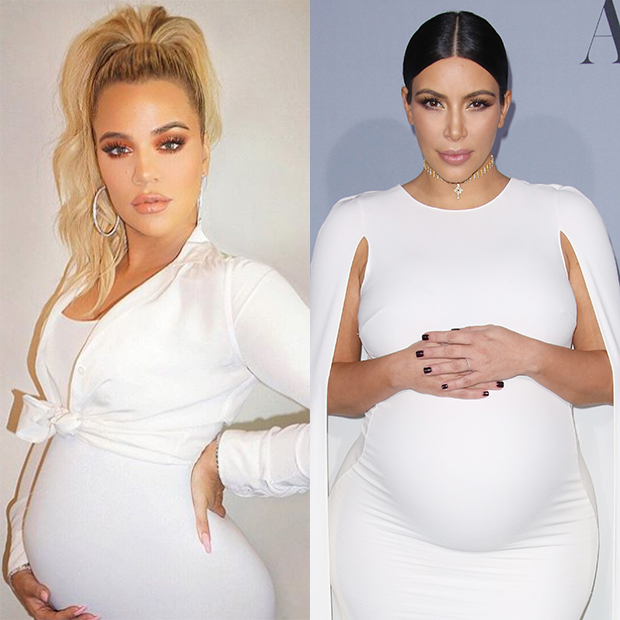 HollywoodLifers, do you love Khloe Kardashian and Kim Kardashian wearing white while pregnant?