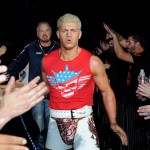 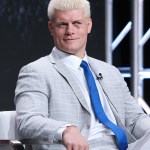 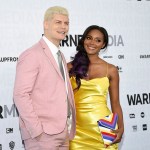 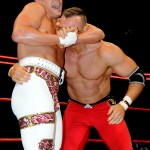 Cody Rhodes has one question: are you ‘All In?’ The Ring Of Honor star talks with us about planning the biggest indie wrestling event ever, father Dusty Rhodes and more!

After an explosive 2017 that saw him win his first world title in Ring Of Honor, Cody (the wrestler formerly known as Cody Rhodes, 32, in WWE) might be on the verge of the biggest year in his pro-wrestling career. Cody, along with the Young Bucks — brothers Matt Jackson, 32, and Nick Jackson, 28 – made headlines when they announced they would run a self-funded independent wrestling show in 2018 in a 10,000 seat arena. Well, as Cody EXCLUSIVELY told HollywoodLife.com, it’s “full steam ahead.” Cody and the Bucks (along with the rest of their popular wrestling stable, the Bullet Club) announced on Jan. 10 that the show is happening and will take place on Sept. 1.

“The cool thing is that it is full steam ahead,” Cody said while EXCLUSIVELY talking with HollywoodLife.com, adding that the response from the pro-wrestling world has been better than he ever expected. “The sentiment from my world, from the wrestling world, just blew me away in terms of getting help and how they can help and how we can make it something different then anything anyone has ever seen before and what is the direction that it will go.”

In 2018, the idea of a wrestling organization that isn’t the WWE successfully selling 10,000 seats seems impossible, and such was the thoughts of legendary pro-wrestling reporter Dave Meltzer. When asked if Ring of Honor could sell out a 10k+ arena, he replied “Not any time soon.” Enter Cody. “I’ll take that bet Dave,” he tweeted in the ultimate “Challenge Accepted” meme ever. “I already gave [Ring Of Honor] their biggest [PPV] buyrate…put The Bucks & I on the card & 3 months to promote.”

If there’s anyone who could prove Dave wrong, it’s Cody. After all, wrestling and promotion is quite literally the family business. In addition to his brother being best-known as the 3-time WWE Intercontinental Champion Goldust, 48, Cody’s late father captured the hearts of wrestling fans as “The American Dream” Dusty Rhodes. In addition to wrestling for the common man in the NWA, Jim Crocket Productions and the WWF, Dusty also operated his own promotion, Turnbuckle Championship Wrestling. He was also an integral part in turning NXT, the WWE’s developmental system, into the success it is today.

“I think he taught me anything I know about anything,” Cody tells HollywoodLife.com, “because with him being my Dad from birth to when he passed away. I think the best thing now is that I get to apply it. I get to apply it. “I think the main thing that has really stuck with me about Dusty is was that he was fearless. It had nothing to do about the money. He was just fearless. ‘I want to do this. I want people to see my vision.’ Whether he was the in-ring performer or the one directing the show itself.”

Thanks for taking this journey with us. The location for ALL IN will be revealed on an upcoming episode of #BeingTheElite -Nick, Matt, Cody

"Memories take us back. Dreams take us forward" pic.twitter.com/AzZUDNBqSt

“I mean, this past [WWE] Hall of Fame, my social media was just blowing up and I knew and didn’t even have to look. I knew that it was because everybody who was to receive that honor had thanked him,” says Cody. “And that to me is really great… these six and seven year old kids that are now tuning into wrestling can’t help but to learn about Dusty because some of their favorite wrestlers. Or their Dad’s favorite wrestlers are Dusty or they came from Dusty. He just created so much and it is just cool to have people see what he created.”

Cody will get a chance to have people see what he creates on Sept. 1. Along with Cody and the Young Bucks, fellow Bullet Club members Marty Scurll, 29, Hangman Page, 26, and Kenny Omega, 34, announced they were “All In.” Plus, Cody’s SummerSlam 2015 opponent (turned friend and fellow Bullet Club member) Stephen Amell, 36, will be at the show. Needless to say, it’s going to be a busy year for Cody.

“Going into 2018,” he tells HollywoodLife.com, “we have to continue with this Bullet Club trend that has swept up the wrestling world. It will take all my attention and anything else that comes along in 2018, I am sure I am ready for. But those things in particular are my baby and my project. I am just excited to get it all off the ground.”

Are you “All In” for this massive independent wrestling show, HollywoodLifers? Who do you think Cody should face at “All In?”