It must have been pretty hot in Kaitlyn Bristowe and Shawn Booth‘s kitchen on Christmas morning because they both decided to cook breakfast topless! While the 30-year-old hunk showed off his muscular torso and buff biceps, his 32-year-old fiancee also decided to go shirtless, wearing nothing but a pair of holiday leggings and a green “ho ho ho” hat.  Shawn posted the racy pic to his Instagram where we see Kail’s bare back while she strategically holds a bottle of syrup to hide her side-boob. “Pass the syrYUPP! #merrychristmas #tradition,” he captioned the pic. OMG, so these two have made sexy topless Christmas breakfasts a tradition? Those must be some passion-filled pancakes.

The look on Shawn’s face is absolutely priceless as he’s gazing over at his topless lady with total lust. The couple met on season 11 of The Bachelorette, where Kaitlyn gave Shawn her final rose. They’ve been engaged ever since and finally plan on tying the knot in 2018. She went wedding gown shopping in NYC on Nov. 6 and shared the experience with her fans via Snapchat. She later revealed that she finally said yes to the dress after being engaged since 2015. See Kaitlyn and Shawn’s hottest pics, here.

Kaitlyn shared in an interview with The Morning Breath later that month that she’d picked out two gowns for her big day, one for her wedding ceremony and another for the reception. After stalling on tying the knot, she revealed that dress shopping finally lit the spark that made her excited to get married. “I want him to go try on a tuxedo or something to get him in the mood,” she shared as she turned to Shawn and said, “I want you to do something that gets you in the mood because it did get me in the mood.” Well, it sure looks like her hunky beau is in the mood for something in this sexy Christmas pic, and it definitely isn’t shopping! 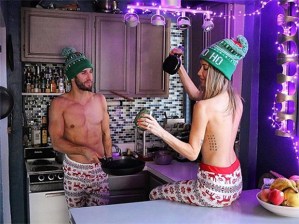 HollywoodLifers, are you excited for Kaitlyn and Shawn’s wedding?