Jonathan Taylor Thomas, 36, is missing. Not really, of course (or at least I hope), but he’s definitely missing in action. His last known public appearance was on August 14, 2013 in Los Angeles, California, according to multiple photo agencies. His last television appearance was in 2015 on an episode of Tim Allen‘s Last Man Standing, where he cameo’d as his Home Improvement character, Randy. Before that he appeared on the show on-and-off as John Baker, but no more than three or four times at best. I even reached out to his rep in September 2017 to do a “catch up” piece and find out what he’s been up to, but was told he “respectfully” passed. But did he? I mean, how do I even know he’s real anymore?

It’s no secret that Jonathan decided to take a break from Hollywood after being one of the biggest, if not THE biggest, child stars of the 90’s. In 2013 he opened up about the break, telling PEOPLE that he wanted to “go to school, to travel and have a bit of a break.” During that time he got exactly what he wanted while attending Harvard University, Columbia University, and even St. Andrew’s in Scotland. But in the same interview he admitted that he was slowly finding his way back into Hollywood with high hopes of directing, producing and creating content for the masses. In 2016 his former TV mom, Patricia Richardson, even revealed that JTT and his on-screen brother, Zachary Ty Bryan, were shopping around an R-rated pilot. However, his IMDb remains bare — which seems crazy because there are millions of crazy people like me who would watch him do anything. Like, literally anything. Like, you wanna make a film about paint drying? I’ll watch it. You want to star in a film in which your character just watches paint dry? I’ll watch it.

As if all of this wasn’t stressful enough for my inner 11-year-old who desperately misses her celebrity crush, he’s also not on social media. Jonathan isn’t on Facebook, Twitter, Instagram or even Pinterest, as far as I know. I distinctly remember the internet getting duped when someone, somehow managed to create a verified Twitter account claiming to be the one and only JTT a few years back. I also remember the utter devastation that waved through me when the account got deactivated and the internet had to admit it had been trolled. Dear whoever that person was: I still hate you.

There are also a lot of looming personal questions to be answered. Is he married? Does he have kids? Is he living off of Home Improvement residuals or is he doing something else with that extremely expensive college education of his? How often does he talk to Tim Allen? Are they Snapchat friends? Does Tim Allen know what Snapchat is? Oh, and when’s the last time JTT talked to Devon Sawa? That last one is important because Wild America forever, guys.

Now that the holidays are here all I want to do is drink hot cocoa and watch I’ll Be Home For Christmas over and over again. But all I really want for Christmas is to know where JTT is. 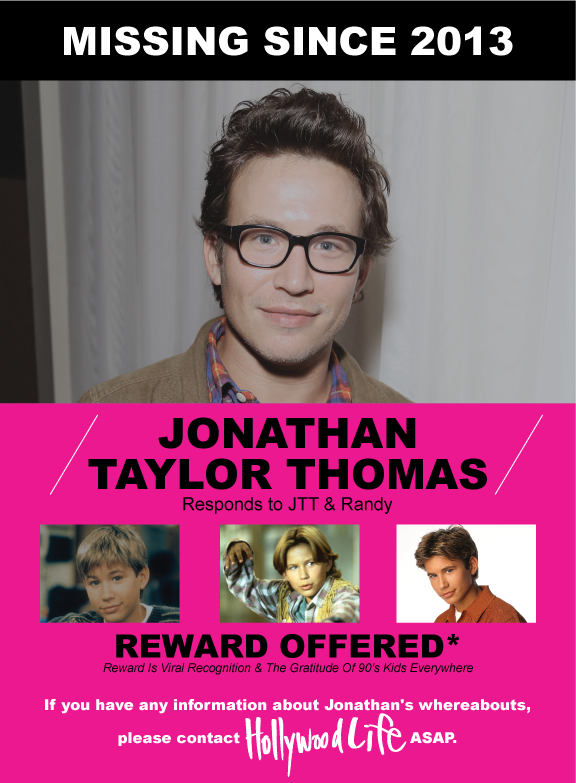 Tell us, HollywoodLifers — Do YOU think we’ve seen the last of Jonathan Taylor Thomas? Comment below, let us know what you’re thinking!