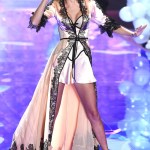 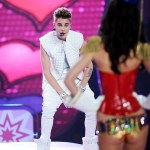 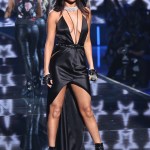 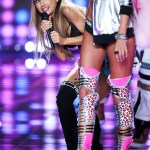 The 2017 Victoria’s Secret Fashion Show was a spectacle, with performances from Harry Styles, Miguel, and more. Let’s take a look at the best performances and moments from the past 10 years!

Last year, the 2016 show was in Paris and featured performances from Lady Gaga, The Weeknd, and Bruno Mars. Bella Hadid and The Weeknd had a sweet moment on the runway — they were dating at the time. We also saw models like Gigi Hadid and Kendall Jenner rock sexy looks on the runway. In 2015, the show was in NYC and featured a sultry performance by Selena Gomez. The Weeknd also performed live in 2015. Taylor Swift performed in a sexy, pink satin robe at the 2014 show, which took place in London. She held hands with BFF Karlie Kloss as she strutted down the catwalk! Ed Sheeran also performed that year and seemed a little overwhelmed to be surrounded by such beauties! 2014 was an intense year — it was also the show where Ariana Grande was famously almost taken out by angel wings!

Taylor also performed at the 2013 show in New York, alongside Fall Out Boy and Neon Jungle. There, she wore a gorgeous silver sequin mini and walked alongside Lily Aldridge. 2012 was a huge year, with a (baby!) Justin Bieber performing in an all-white alongside Rihanna and Bruno Mars. Angel Alessandra Ambrosio wore the $2.5 million fantasy bra in 2012, along with iconic orchid wings.

Way back in 2011, Jay-Z and Kanye rocked the stage in New York! Can you believe that?! Nicki Minaj performed with a bright pink wig, and Maroon 5 took the runway as well. Adam Levine was actually dating VS model Anne Vyalitsyna at the time, and they bonded during the show. They later broke up and he married VS Angel Behati Prinsloo! Katy Perry rocked out in dramatic outfits in 2010 — we forgot about some of these amazing performances! Scroll through the gallery to see pics from the past 10 years of Victoria’s Secret Fashion Shows!

HollywoodLifers, what’s your favorite VS Fashion Show performance of all time?