Wowza! Meghan McCain, 33, made for such a beautiful bride in her surprise wedding to conservative pundit Ben Domenech, 35. The new The View panelist wed her sweetie on her family’s Arizona compound on Nov. 21 and we’ve got the pics of her gorgeous gown, the wrdding cake and more! The conservative panelist’s news of her engagement just broke on Nov. 1 and clearly they were well into their wedding planning as they tied the knot at a ranch in Sedona, AZ. Meghan was such a beautiful bride in a sleeveless form-fitting ivory gown with a jacket featuring white fringe as a tip to her Western style.

“Meghan McCain and Ben Domenech were married today at the McCain family lodge in Sedona, Arizona,” a McCain representative told PEOPLE on the big day. “The bride’s father, Senator John McCain, gave her away and they were married by John Dickerson. Following the ceremony, McCain and Domenech celebrated with dinner and dancing surrounded by their family and close friends.” See more pics of Meghan, here.

Meghan revealed on The View in early November that she had been engaged to The Federalist publisher for a some time but finally decided to give up her secret. “We have been together for years ans we have been engaged for a while and it was a secret,” she shared. The couple decided to tie the knot after her fther was  diagnosed with glioblastoma, an aggressive stage 4 brain cancer in the summer of 2017. She wanted to make sure he was there to walk her down the aisle and he proudly did just that for his youngest child. 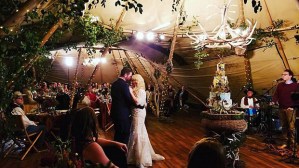 HollywoodLifers, what do you think of Meghan’s wedding gown? Is it as dreamy and fairytale-like as you could have hoped for?

Related: Katie Couric & Meghan McCain: A Timeline Of Their Feud