WOW! Selena Gomez shocked her fans by hitting the AMAs red carpet as a blonde, the first time she’s ever dyed her locks so light from her naturally dark color. The look got a big thumbs up from her newly reunited sweetie Justin Bieber, 23, who is absolutely wild about his girlfriend going blonde. He gave her a great big like on an Instagram polaroid that Sel posted around the same time she hit the red carpet rocking her fair hair. Justin isn’t the only one, as within just an hour over 1.5 million other fans also gave her new look an IG like.

Sel must have hit up her hair stylist within the last few days as she was spotted giving the Biebs a sexy kiss at his weekly hockey game on Nov. 15 and she was still a brunette. There’s still a trace of the “Hands to Myself” performer’s natural color as she left her roots noticeably dark while the rest of her locks are now just a shade bit darker than full platinum. Not only did Justin love her blonde ‘do, so did Sel’s BFF Taylor Swift‘s arch enemy Kim Kardashian, 37, who also gave the singer’s look an Instagram like as well. Kimmy has gone back and forth between dark and platinum blonde several times, yet this is the first time Selena has dipped her hair into a bleach job. 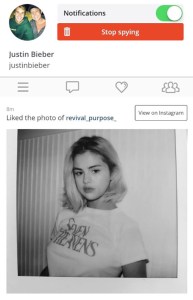 HollywoodLifers, what do you think of Selena’s new blonde hair? Does it look totally hot on her?