Sadly it’s becoming all too common to hear about stories of sex between students and the teachers who should be looking out for their best interests. Hunter Day, 22, a first-year chemistry teacher at Yukon High School in suburban Oklahoma City is under arrest for allegedly having sex with one of her male students and exchanging nude photos with him. The married woman was busted in an elaborate sting by Canadian County Sheriff’s deputies after the boy’s parents came to them with suspicions that their son and his teacher might have already been intimate after they found text messages and nude photos on his phone.

Investigators did a forensic exam of the teen’s cell phone and confirmed the parents worst fears that the teacher and student had allegedly already had sex. They were scheduled to meet at her house on the afternoon of Nov. 15, and authorities seized the opportunity to bust Day. One of the investigators used the teen’s phone to call and confirm that their hook-up was still on. She told him it was but that he needed to hurry to get there before her husband got home from work. Get this — the hubby also works at Yukon High School as a football coach!

Deputies texted her “I’m here,” and Day wrote back, “the door’s unlocked as usual.” When they entered, authorities found the teacher sitting on the floor of her candle-lit living room with the lights turned off while wearing a pair of black exercise shorts and a Christmas cat t-shirt. Not exactly the most seductive of outfits, as the deputies took a pic of her documenting the arrest and the photo shows the teacher with her hands behind her back in cuffs while her hair is in a loose bun atop her head. It looks like she really wasn’t dressing to impress for the teen, but when questioned she reportedly admitted to having an illicit and illegal sexual relationship with her student. She also confessed that the two had been sexting, as she allegedly sent the teen pics of her in a bra and underwear and he sent her photos of his penis.

The pretty young teacher is now behind bars in the Canadian County jail facing charges of second-degree rape, possession of child pornography and soliciting sex from a minor using technology. Her bail has been set at $85,000. “This is a classic case of a serious breach of public trust. School teachers are entrusted to protect and educate our children, not to engage in an unlawful sexual relationship with them,’ Canadian County Sheriff Chris West said in a statement. “I’m no longer surprised by the people who commit these crimes, because predators come from all walks of life.” 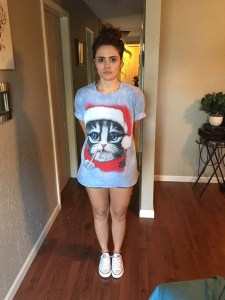