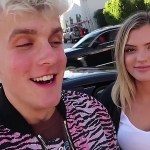 The drama is fresh and the tea is hot right now in the YouTube community, after Jake Paul accused his brother, Logan, of sleeping with Alissa! See the now-deleted, scathing tweet here.

YouTuber and ex-Disney star Jake Paul, 20, made good use of that 280 character limit on Twitter and got a little too real with his fans. Jake’s in the middle of drama with his buddies, the Martinez Twins, and his followers were commiserating with him over the difficult situation. He opened up a whole ‘nother can of worms, though, when he dragged brother Logan Paul, 22, and ex-girlfriend Alissa Violet, 21, into the mix with a truly shocking tweet. He accused Logan of sleeping with Alissa while they were still dating, and even living together! Um…awkward.

A stan account tweeted at Jake that splitting with the Martinez Brothers (over some YouTube bad blood that we’re not even going to pretend to understand), saying it was “just like Alissa ALL over again.” Jake spit some truth at them — and his over two million followers — revealing a teeny tiny little secret. “Yeah…and this time I’m not being silent…Alissa f**ked my brother…that’s why I kicked her out…oops I just told them the truth….I’m done being the ‘bad guy'” he tweeted. Oh, buddy, no!

It appears that Jake deleted the tweet, but the internet is forever. His, and Logan’s fans freaked out and took screenshots immediately. Forget the Martinez Brothers drama; this is even better. So far, Logan hasn’t responded to the spilled beans. Alissa might be a different story.

The only thing she tweeted the same day as Jake’s message was “Wait what hahahaha”. The next day, she tweeted several photos of herself looking insanely gorgeous, and retweeted one of her own tweets from earlier in the month: “the best revenge is no revenge. move on. be happy. find inner peace. flourish.” We have a feeling she has someone particular in mind with that message.

HollywoodLife.com has reached out to both Jake and Logan’s reps for comment.

HollywoodLifers, are you shocked that Logan allegedly slept with Alissa? Let us know!