SPOILER ALERT: If you aren’t caught up on The Walking Dead‘s eighth season and don’t want to be spoiled, you should stop reading this right now. Last chance! Okay, onto the theory: some fans believe that the little girl we saw in Rick’s flash forward/fever dream might actually be Gracie instead of his daughter, Judith. You’re wondering, how could that be possible? Well, to be honest we’re not quite sure — but the theory makes sense. Let’s go over the evidence.

The most damning piece of evidence that the little girl is Gracie, not Judith, happens to be the stuffed rabbit she’s carrying when she runs out to greet Rick in the flash forward/fever dream. You can only see a glimpse of it, but what you can see is nearly identical to the bunny that’s placed in the crib alongside Gracie when Rick finds her. Now to be fair this could mean other things, like that something terrible happened to Gracie and Rick took the bunny to give to Judith, or that he just took the bunny to give to Judith while leaving Gracie behind. However, as we all know, Rick is a real softie at heart — especially for children — so it’s unlikely he would let anything happen to Gracie, and even more unlikely he would steal a baby girls toy for his own child. Hmm. 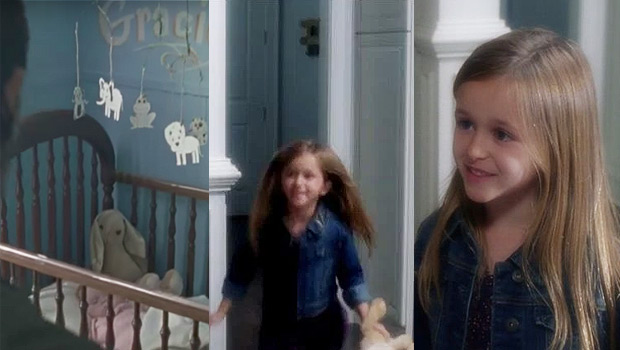 Secondary and purely speculative evidence is the little girls age in the flash forward/fever dream. She can’t be more than six or seven, and while we don’t have an actual age for Judith because time isn’t exactly something that is specified on The Walking Dead, that seems a little young. In the flash forward Rick is greying, losing his hair, and has a long beard, while his son, Carl, is so much older that they didn’t actually show us 18-year-old Chandler Riggs because he’s still a teen. Even if Judith is three or four years old at the start of season eight, the future version of Rick had to be aged at least ten years, no? Again, this is pure speculation, but all things that should be considered for this wild theory! And if the little girl is, in fact, Gracie… then where is Judith? Uh oh.

While this theory is fascinating, there is also damning evidence that goes against all of it. Kinsley Isla Dillon, the adorable actress used in the flash forward/fever dream, is credited as “6-year-old Judith” on the show. It’s also the name that was used on her trailer while she was filming, which she posted a picture of on her official Facebook page. You can check it out below:

So, what do YOU think, HollywoodLifers? Is the little girl Gracie or Judith? Comment below with your theories!

Related: Vanessa Cloke: 5 Things To Know About ‘The Walking Dead’ Actress, 43, Who Was Arrested