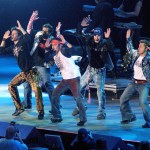 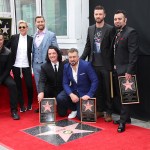 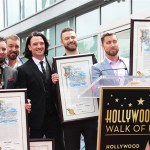 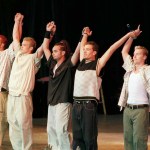 Chris Kirkpatrick became a 1st-time dad after wife Karly gave birth to a cute baby son! The 2 are already so in love with their little one, revealing a 1st pic of the infant and gushing that they’re ‘over the moon!’

Congrats to Chris Kirkpatrick, 45, and his wife Karly! The two officially welcomed their baby son on Oct. 10, according to People magazine, and their little guy is beyond adorable! Chris and Karly named their baby boy Nash Dylan Kirkpatrick, and he entered the world measuring 19.5 inches and weighing 8 lbs., 9 oz. He was born in Nashville, Tennessee, and already the proud new parents have given fans a first look at the newborn. Click here to see adorable pics of some of the cutest kids in Hollywood.

Taking to Twitter not long after Nash was born, Chris shared a precious photo of his wife cradling the little guy in her arms while laying in a hospital bed. “So proud of @MagicKar! She is the real Wonder Woman! Welcome our new edition Nash Dylan Kirkpatrick!!!!,” the ‘Nsync alum wrote. Chris and Karly revealed they were expecting back in March with a sweet photo in front of a photoshopped movie poster for The Boss Baby. “Karly and I are over the moon excited that we are welcoming a new addition to the family,” Chris told People at the time. “We are both looking forward to becoming parents, and learning how much fun having a child will be.”

Since Chris and Karly revealed they had a baby on the way, they’ve documented the pregnancy on social media, with Karly tweeting a picture of her bare belly just last week. “Alright little guy we are ready for you!!! Any day now!!! #BabyNash,” the new mom captioned the pic. Well, now baby Nash has finally arrived — AND he’s such a cutie pie! Congrats again, Karly and Chris!

So proud of @MagicKar! She is the real Wonder Woman! Welcome our new edition Nash Dylan Kirkpatrick!!!! https://t.co/ZdLIuOotkf pic.twitter.com/XedybGCjBu