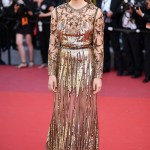 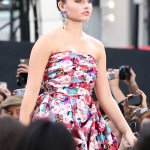 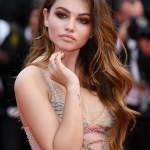 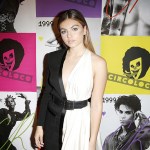 You’re way too beautiful girl, that’s why we need to know everything about you! Thylane Blondeau, who received praise for her intense beauty as a kid, is becoming a serious model! Here is everything about her!

1. Thylane Blondeau is a French beauty with famous parents. Thylane Blondeau, 16, is the daughter of European soccer player Patrick Blondeau and actress and television presenter Véronika Loubry. She was born in Aix-en-Provence in the South of France. She is also very proud of her parents (posting pics of them to social media). And is always showing off her French pride, recently sharing a pic on Instagram of her with a tiny temporary tattoo of a French flag on her cheek!

2. She began modelling at a very young age. Thylane first hit the runway at just four years old! She was walking for French designer Jean Paul Gaultier, a pretty big deal in the fashion world! She was then called the “most beautiful girl in the world” when she covered Vogue Paris supplement Vogue Enfants at 6. The iconic pic of her has since gone viral (check it out below, we’re SURE you’ve seen it before). When she 10 she appeared in adult clothing and makeup for the supplement, which cause controversy over the idea of sexualizing children in advertising. She then snagged her first cover at 13, appearing on the front of Jalouse.

3. Her modelling career is now on the fast track (obviously). Though she didn’t walk in Tommy Hilfiger and Gigi Hadid‘s Spring 2018 show at London Fashion Week for their Tommy X Gigi collab on Sept. 19, she did make a serious impression when she walked the carpet! She scored a great seat the show too, where she sported head to toe Tommy! Even though she wasn’t on the runway with Gigi, her sister Bella, Hailey Baldwin, and Jourdan Dunn, we imagine she will be very soon! Click here to see pics of Tommy’s show at London Fashion Week.

4. She has friends in high places. Her BFF is Gabriel-Kane Day Lewis, 22, actor Daniel Day Lewis‘ son. She has also filled her social media pages with pics of her and other celeb “amies” like actress Elle Fanning, 19. But, of course, when you already have as much star power as Thylane, you are bound to run in some elite circles!

5. She’s a Disney fanatic. Thylane recently posted pics of her and her squad at Disneyland Paris and, OMG, did it look like she was having a blast! It is clear she is definitely still a kid, even if she has grown up very fast in the modeling world!

HollywoodLifers, what do you think of Thylane? Is she truly the most beautiful girl in the world? Let us know below!