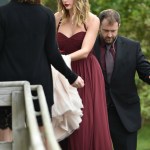 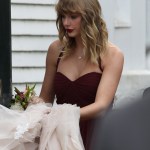 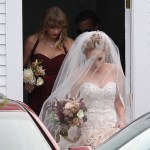 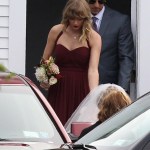 Talk about blowing up your BFF’s spot! Taylor Swift gave a hilarious speech at Abigail Anderson’s wedding, and it involves telling a racy story about the happy couple’s bathroom romp.

Taylor Swift, 27, held nothing back when it came time to deliver the speech at Abigail Anderson‘s wedding to husband Matt Lucier. New video has leaked showing Abigail’s reaction as Taylor delivered her speech during the wedding reception at Martha’s Vineyard on Saturday, September 2. In the video, Taylor’s voice can be heard speaking into a mic and telling a raunchy story about Abigail and Matt that maybe they didn’t want everyone to hear. Thankfully, both Abigail and Matt, who are holding hands in the video, couldn’t stop laughing as Taylor spoke. Phew!

“She’s running after him, there’s falling, there’s stumbling. They make it to the bathroom and I hear sounds that I can never un-hear,” Taylor says as the reception laughs, including whoever was taking the video. “And then, there’s silence. And then…” Sadly that’s where the video cuts off, leaving the rest of the moment between Taylor, Abigail, Matt and their wedding guests. We’re so glad to see that Taylor was not only a hilarious speech giver, but that she and her best friend had the time of their lives on such a big day. Check out the short but funny video below:

Tell us, HollywoodLifers — What do YOU think about Taylor’s speech at Abigail’s wedding? Comment below, let us know!