With news that Natalee Holloway’s remains may have been found, her father, Dave Holloway, is being forced to relive his daughter’s tragic disappearance and death allegedly by the hands of Joran Van Der Sloot, 30. Sadly, as it turns out, had Dave gotten his way, his daughter would have never gone to Aruba in the first place. “I came from the old school and when I graduated [from high school] you went to the state park or whatever,” Dave EXCLUSIVELY tells HollywoodLife.com. “And I’ve always been real conservative and of course her mother Beth and I divorced when they were very young, and I’ve always been real concerned about that.

“She approached me two days before she was supposed to turn her paperwork in and said, ‘Hey, Dad I need $500 bucks to go on my senior class trip,’” Dave tells HollywoodLife.com. ”And I said, well, where are you going? She said, “We’re going to Aruba!” I said, what? I didn’t even know where Aruba was and I told her I’m not supporting that. It’s just too much. It’s too extravagant for a bunch of kids to go somewhere, it’s not happening.”

“I put my foot down then, and of course I found out later that she went ahead and got her mom to sign her up,” Dave added. “I found out about it a few days before the graduation trip and I felt a little guilty. I said, ‘okay. Here’s your money and your spending money.’ And I kind of conceded and laid the blessing on her. She made a call to the house later on and thanked me for the money I had given her.

When Natalee called to thank her father, she spoke with his wife, Robin, that Dave says gave the “parental speech” of being careful when going out of the country. Natalee reassured her that she “would be okay with all of her classmates and chaperones,” Dave said. “Robin said, ‘just be careful. You’re going on a trip, just be contentious of your surroundings’ … and you see what happened.” 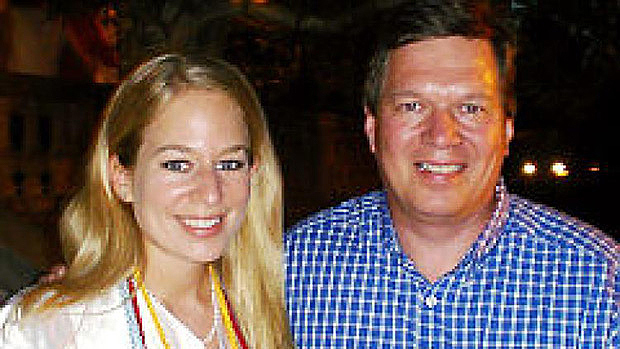 Indeed. Natalee vanished in May 30, 2005, causing a media sensation in the United States. She was last seen with Joran and brothers Deepak and Satish Kalope. Aruban investigators conducted an extensive search throughout the country, but her remains were not found. Though he was never tied to Natalee’s disappearance, Joran was found guilty of “qualified murder” of a second woman, Stephany Flores Ramirez, in 2012 and sentenced to 28 years in prison.

Dave announced on Aug. 16 that he hired a private investigator and, after an 18-month investigation, they found human remains they think might be Natalee. The investigation was filmed for the docu-series The Disappearance of Natalle Holloway, airing on Oxygen on Aug. 19 at 7pm and 9pm ET.

What do you think happened to Natalee, HollywoodLifers?