While rocking a carefree dress at an LA event, fans became convinced Amy Adams has a 2nd baby on board! The star’s frock stuck out from her stomach, with people claiming there’s a bump! See the pics.

Does Amy Adams, 42, have a bun in the oven? Fans seem to think she does! After stepping out on Aug. 13 for producer Jennifer Klein‘s 19th annual Day Of Indulgence event in LA, the Twittersphere seemed convinced the Arrival star has a second bundle of joy on the way due to how her billowing, flowy dress fit her figure. In fact, in some pics, a baby bump does seem to be hiding underneath her frock — but of course certain angles can be deceiving, so you never know! If the actress IS in fact expecting again though, this would be her and her husband Darren Le Gallo‘s, 43, second child together, as they’re already the proud parents of seven-year-old Aviana Olea Le Gallo.

Amy’s sweet floral dress was midi in length and featured a green pattern all over it. She stylishly pushed up her long sleeves and paired the ensemble with Vince Camuto brown heeled mules and black oversized sunglasses. She was also smiling from ear-to-ear! Posting a pic on Twitter of the Oscar-nominated star, one fan confidently wrote, “Amy Adams is pregnant #Arrival.” While another fan, who calls themselves “the real Amy Adams,” gushed, “I’m pregnant” in response to the rumors. Click here to see celeb moms showing off their gorgeous baby bumps.

The star-studded bash at Jennifer’s house included other famous guests as well, such as: Kerry Washington, Lea Michele, Debra Messing, and Katharine McPhee. The ladies were treated to lavish spa treatments at the private residence — including manicures and massages. Since Oscar season, Amy has stayed relatively out of the public eye, but that will all have to change come fall. Her schedule will inevitably fill up with the release of Justice League, the next blockbuster installment in the DC anthology. Fans are excited to see Amy reprise her role as Superman’s love interest, Lois Lane, in the film. Expecting or not, we can’t wait to see Amy’s red carpet style in the upcoming months! 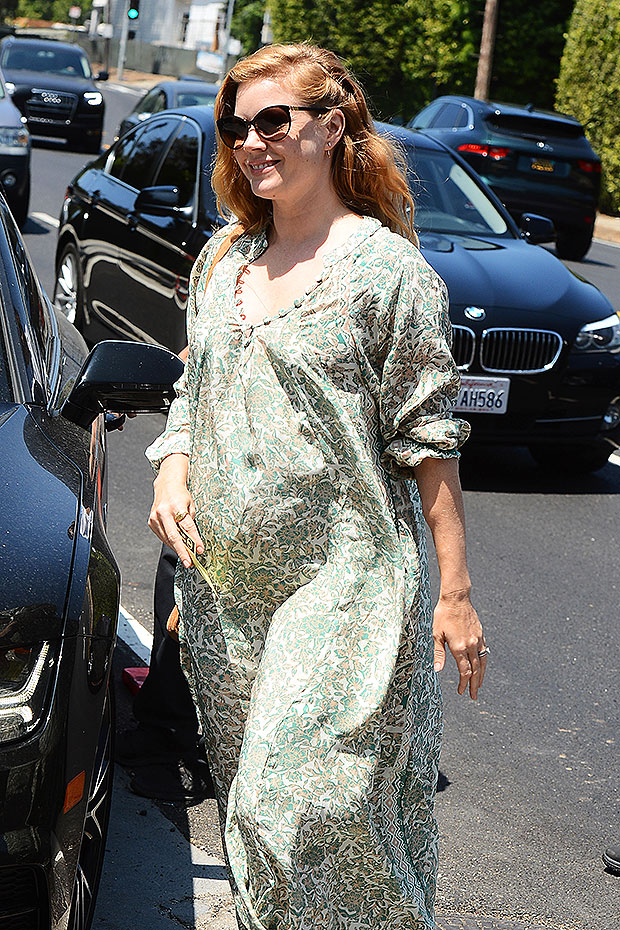 Tell us, HollywoodLifers — do YOU think Amy could be pregnant? Or is it just the fabric of her dress?