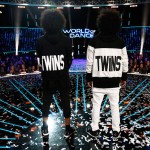 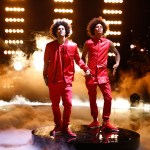 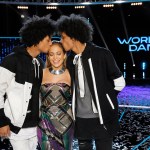 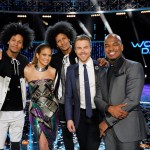 For 10 weeks, Les Twins battled on the ‘WOD’ stage. And, it paid off! Now, the champions are responding to critics who claim they had a leg up on the competition because they’ve worked with Beyonce.

Les Twins, made up of brothers, Laurent Bourgeois and Larry Bourgeois, 28, are two talented individuals, you’re going to want to keep your eye one. The siblings from Paris, France danced their way to the first-ever World Final of NBC’s newest hit show, World of Dance. And, after months of fresh choreography, endless hours of practice and an unexpected injury that could have cost them the competition, the twins took home the $1 million prize on August 8. And, the crazy things is, they’re just getting started. [Read more about Les Twins’ upcoming projects, HERE]

Some of you may have recognized them from Beyonce‘s music videos, her 2013 The Mrs. Carter Show World Tour, or her and JAY Z‘s On The Run Tour in 2014. But, if not, you most likely caught them on one of their 32 television appearances, including, The Ellen DeGeneres Show and more. No? What about one of their 19 music video appearances? Oh, and, this was all before their World of Dance debut. No big deal, right?

Now, the dancing duo are on a different journey; a journey where they will show the world “the new face of Les Twins,” featuring the A-list worthy talent they possess. And, like the brothers EXCLUSIVELY told HL when they visited New York City, August 9, they “don’t do anything less than 100 percent.” Read our full interview with Les Twins, where they relive their WOD experience; explain what it was like to work alongside Bey, including how she taught them to speak English; their response to any haters out there who try to dim their shine, and MUCH more!

Take us back to the moment you were crowned first-ever World of Dance champions.

It was amazing. [When we won] we didn’t believe it in the sense that we felt like, ‘Omg finally! It happened the way it was supposed to happen!’

Since you’ve been on a slew of different shows, how has WOD compared to the others?

The difference is this that the [WOD] competition mixes every category of hip hop and dance worldwide; ballerina, contemporary, circus, acrobatic, tap, everything. And, anything is possible. It was us against the world and it was beautiful.

What would you say to or about critics who claimed you both had a leg up on the competition in WOD, because of your history with Beyonce, and your established status in the dance world?

The thing is, we have a different way we go about it. Haters will say say, ‘Oh Les Twins won because of who they are.’ But, we went up against Keone & Mari who had quick style, and the most famous dancers and powerful, acrobatic people like, Super Crew, and everyone thought they were going to win. But, the thing is, we kept new and fresh choreography for the show. Every day, we were keeping it fresh and trying to make sure that the judges saw the new faces of Les Twins and we’re not going to sleep on our name. And, we said this from the first interview in the first episode, ‘We’re not going to let them think we’re here to play games. This is our name and we’re not going to let it go.’ And, we’re glad that haters and most people who didn’t know about us, got to see what we were about; Because, we never, in life have given so much of ourselves, on any TV show; that was the first one. They have a whole story of our lives; where we come from, and they make us talk so much about our lives and we hate it. But, at the same time, they did a really good job at telling our story. So, haters right now, they have nothing else to say besides, ‘Oh Les Twins made it.’ Even haters say now that they love the choreography. We bet they look at our videos on YouTube.

Laurent, can you explain exactly how your injury happened before the Divisional Finals? [The full story didn’t air]

It happened during the WOD Snapchat battle during the semi final. Every day we were working so hard, and we were doing the show; so when you don’t eat and have less sleep, plus I was already in pain before that. Dancers always feel like superman every day; So, I kept going, but I already felt weak and the floor was sticking too. I did some tricks and my leg just didn’t follow my body and I twisted my whole leg. My leg was numb until the show.

Laurent, what was the process like after the injury, mentally and physically when preparing to go into the Divisional Finals? What did you do?

I didn’t want to come up with any idea. But, for real, Ne-Yo came and said something really beautiful when he saw me feeling the music [in the wheelchair]. I explained to him that the music that we choose is touching and we feed off it. He was looking at my brother and he was like, “I don’t see the chair no more,” because that’s how much I was feeling the music. He said, “There’s no mercy for you. For me it doesn’t count. I’m going to judge you like I judge other people [although you’re injured].” He was so right. My brother was mentally touched too, because when you see your brother in this situation, it’s hard. When we started dancing, my brother started using me as a prop, but I didn’t want to be a prop. I really wanted to be the reason why people can stand up and God can give them something to change and keep going, and never stop.

It’s clear that the passion you both exude when you dance is incredible. It’s written all over your faces with your epic impressions. Where does that come from?

We come from a family of nine brothers and sisters at home, and everybody dances. And our mom, she was pretty tough at times. We had no friends, and to have friends we had to bribe them with candies. It’s just funny the way things go on. We had a great education at home, but outside, it was like school recess. For us, school was more like our home, it was tough. Then outside of that, it was like, ‘Ah finally’ we’re free. We have a problem… we can’t do things without doing it 100 percent. Everything we do is 100 percent.

You guys go from being self-taught dancers to touring with Beyonce and JAY-Z — How does that even happen?

We started in Paris by word of mouth, YouTube, by people recording us in the street dancing. And, then people started talking about us and recognizing us. Then, we started doing battles and shows and shows that we created ourselves. We made it so far and we didn’t believe it until we bought tickets to go see the beauty that is New York City, Times Square. [When we got there], we were being seen by everybody. Then Beyonce found us, and that was back when there was only MySpace and MSN. But, as soon as she found us, it was a wrap; we never went back home after that.

Truly, how was it to hang out and dance with Beyonce?

We couldn’t believe seeing a woman, and that’s nothing racist, but seeing her work as much as us, men. She just cares about everything, every person, every light and detail. She is the future and she’s awesome. She’s taught us a lot about our own business also. She taught us English; we never spoke English before her. She used to take us to the studio when she was writing music and to just see the way she works, blew our mind.

Now that you guys are WOD World Champions, what’s next for you?

We’ve already built something big and America is where we want to stay. We want to make sure people know that we’ve started music. We have a new music release on iTunes called, “What Happened”. That’s just a baby start. We have so much going on right now that we can’t even put into words what we’re going to do in America — Touring, performing. We can’t wait to have people see what we’re about. This is just the beginning. We hope artists that we really appreciate will come to us, to work with us, in the future because we have mad ideas. We’ve proved to the world that we’re good dancers. But, now, we have to prove to the world that we can perform for them.

HollywoodLifers, what did you think of the WOD finale?