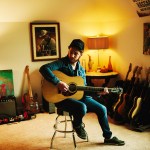 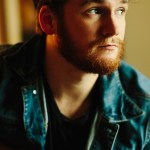 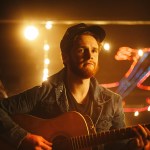 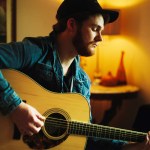 Ben Haggard is making his own name in the music industry. Partnering with Fender, the son of Merle Haggard is paving his path through the country music world with his own incredible talent.

Ben Haggard has been playing a Fender guitar since he was 6 years old, and now, at 24, he is helping the guitar giant promote their new Paramount acoustic-guitar line while revealing some of his deepest memories with his father — country music icon Merle Haggard. From performing at the Grammys to touring alongside Merle and Willie Nelson when he was suppose to be in school, Ben is now building his own career and dipping into songwriting and singing since Merle’s passing in April 2016. “I’ve had to learn that craft in the last two years or so. I’ve really had some things you know, in life that they hit you hard and there’s no better way to feel about them than on paper,” Ben said about his songwriting process EXCLUSIVELY to HollywoodLife.com. Don’t get us wrong, though, Ben still covers his father’s greatest hits, like “Footlights,” which he beautifully performs on a Paramount acoustic in the Fender-produced, must-watch video above. Read some more of the fascinating interview below!

1. You father, Merle Haggard, got you your first guitar at 6 years old. What kind of guitar was it?

Ben Haggard: That was a Fender Telecaster Deluxe. It was like a 70’s model of some sort. I’ve found it in our closet that had all of our cars stowed away at the house at the time. I kind of came running out, he just got off the road and I said “Dad, can I have this guitar?” and kind of being a little six year old kid, didn’t know much about anything. It happened to be his longtime guitar player Roy Nichols’s guitar, who was very groundbreaking in the country music scene at the time in the 60’s and 70’s, as far as guitar, the Telecaster goes. He was kind of, at the forefront of things and it happened to be one of his old guitars and I didn’t really know it, and he said “Yeah, sure you can have it.” I later come to find out, you know, when I started playing about 13 or something like that, I really started to realize what it was, and whose it was.

2. Did you parents push you to play music and get into the industry or did you find it on your own?

Ben: I think I was drawn to it. They were never, never the type to put me through classes or anything like that. They just kind of let me develop an interest of my own, which was very early on. You know, they influenced the interest a lot, you know, they played a lot of music that they liked, and their interest became my interest and before long I was wanting to know how to create that music. I was taken out of school in 3rd grade to be home-schooled, and my parents didn’t really care for the school system at the time. I just had no interest in school, you know. I was totally drawn to music at the time. Going on the road, it was really hard for me to juggle trying to learn things musically and just trying to do my algebra at the same time. It just was not working.

3. Was there anything in particular your dad would tell you or teach you that still stands out today?

4. What is your great musical memory?

Ben: I had the opportunity and blessings to be able to play on the Grammys at a very young age, behind Kris Kristofferson, Willie Nelson, Blake Shelton and Merle Haggard, and that was, in my young life, probably a pinnacle moment. There haven’t been a lot of moments that top that. It’s been really neat to be over there in front of all those people and all the stars, looking them right straight in the eye and it’s like, “Wow, this is incredible.”

5. With your Fender collaboration, you played the new Paramount guitar line, while performing your father’s song “Footlights.” What does that song mean to you?

Ben: It has kind of taken on a new meaning for me since his passing. Before he passed away he said, “Hey, don’t slow down, don’t lose your chops. Keep on playing until you got your own thing going on, and then just kind of move along with it.” I had to kind of pick up on a different meaning from “Footlights.” It talks about a guy, having to go out there even if his heart is breaking, going up on stage and try to give those people a good show and give them their money’s worth, despite your heart’s breaking inside or you miss somebody, along those lines. The show must go on.

HollywoodLifers, are you excited to hear Ben Haggard’s own music? Let us know!