Social media can be hell, as Lesley Ann Brandt found out after sharing a pic of her breastfeeding her newborn son. When some fans called it ‘gross,’ the ‘Lucifer’ star blasted the haters as hypocrites!

“Apparently an innocent photo of me feeding my child has ‘offended’ some on [Facebook] and sparked a really interesting and disturbing debate,” Lesley Ann Brandt, 35, said in an Aug. 5 message posted to (of all places) her Instagram. It seems that some people were upset with the shot of her feeding her son, Kingston Payne Brandt-Gilbert, her first child with husband Chris Panye Gilbert. “‘It’s a private moment, she’s seeking attention, why would she post that, gross, women have been doing it for thousands of years, so what, you should cover up.’ The irony is that these some men and sadly women, are all but fine to see these boobs in my work (Spartacus) but breastfeeding my son? How dare I!”

She has a point. The picture, which is still on her Instagram, by the way, doesn’t reveal anything that wasn’t exposed during Lesley Ann’s stint on Spartacus: Blood and Sand and the second series, Spartacus: Gods of the Arena. The pic, “This is motherhood,” she captioned the original “controversial” photo of her feeding her newborn. “Needing to pee so badly but you just rocked the perfect latch and Bebe is nuzzled in nicely for a good feed. Priorities people. Priorities. #kingstonpayne #myking #normalizebreastfeeding #breastfeedwithoutfear #theseboobsareoutofcontrol

“What does it say about how we treat mothers and women when folks are fine for an actress to show cleavage or boobs in a show, but heaven forbid she celebrates what is arguably one of the hardest things she’s done – nourish her child,” Lesley Ann added. “Using my social media to positively show breast feeding is my choice and will hopefully give other mama’s out there the confidence to NOT go to a bathroom to feed their babies. AND if you have a problem with my son eating, ‘suck it.’” 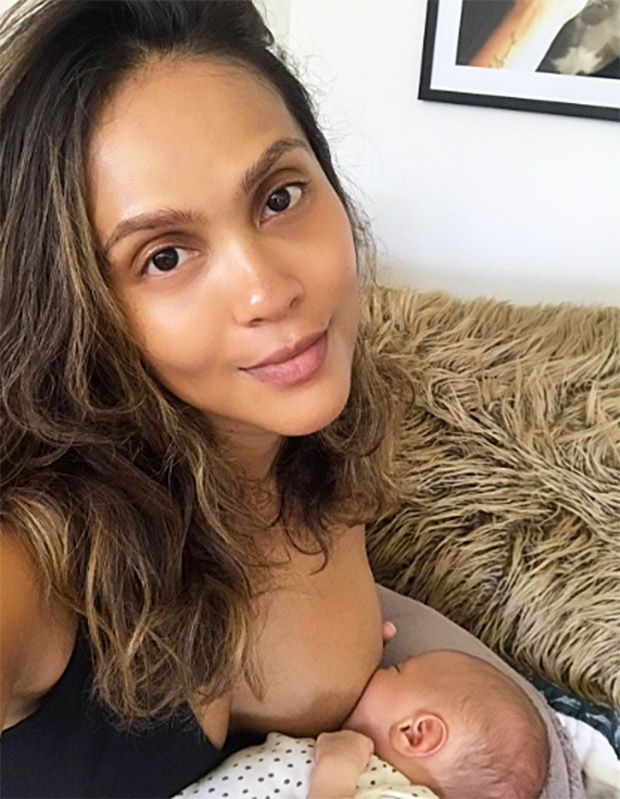 Lesley Ann becomes the latest celebrity to shut down her “breastfeeding shamers.” Pink, 37, Alyssa Milano, 44, Olivia Wilde, 33, Chrissy Teigen, 31, and more have all fought back against people telling them to cover up or not share this perfectly natural act. “[Breastfeeding is] very loving and sweet, but it’s not easy,” Chrissy said in 2016. “It’s hard to work your entire day around getting her the nourishment she needs because they are just little animals.” It seems that one of the other obstacles when it comes to breastfeeding is dealing with all the hate online.

What do you think about Lesley Ann sharing a picture of her breastfeeding her son, HollywoodLifers?