Kylie Jenner, 19, and Kim Kardashian, 36, have been put on notice, because there’s a brand new sexy social media sensation: Kris Jenner. The 61-year-old queen of the Kardashian Empire proved she could take a hot-as-hell selfie just like her daughters. Her pic was so tasty, it left Khloe Kardashian, 33, stunned. “Kris Jenner looking like a snack,” Khloe said while uploading the selfie to her Instagram on July 29. “I see you mommy! #6KidsAndBad!”

Damn. Think about what Khloe said. Kris has given birth to six kids – Kylie, Kim, Khloe, Kourtney Kardashian, 38, Kendall Jenner, 21, and Rob Kardashian, 30 – and she still looks amazing! She could very well hold her own in a selfie-off against her daughters. The best thing about Khloe’s stolen snap (seriously – did she take Kris’s phone, which was used to take the photo, to upload it to her Instagram account?) is that it shuts down any backlash following Kris’s alleged “photoshop fail.” The KUWTK star posted a snap of her with unusually smooth skin and a surprisingly tiny waist on June 22, causing many to accuse her of doctoring the photo.

It seems that Kris’s body is the hottest topic of the summer. In addition to this photoshop controversy, Kris was accused of getting butt implants! Really, the woman who gave the world Khloe, Kim, Kourt and Kylie’s badonkadonks was accused of getting work done on her derriere. While these allegations could make anyone feel bad about their body, Kris was not sweating it. In fact, she was living for it. Kris was absolutely thrilled that people were focused on her and not on the latest thing Kim or Kyle were (or was NOT) wearing. 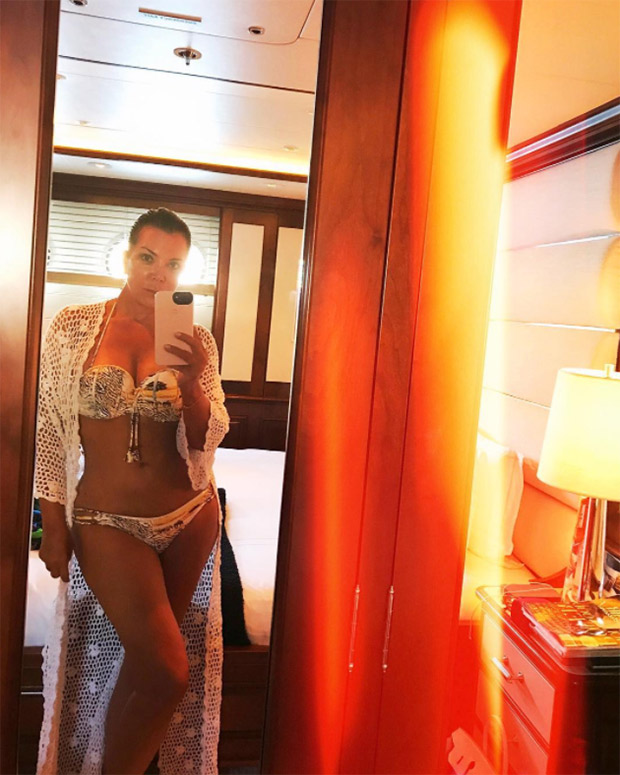 It could also help that Kris has a man who’s absolutely in love with every inch of her body. Judging by that selfie, is it any surprise that Kris’s boyfriend, Corey Gamble thinks she’s the “sexiest woman on earth?” Plus, while people were accusing Kris of having her booty enhanced, he was more concerned with getting his hands on that booty. “He can’t get enough of it,” a source close to the couple told HollywoodLife.com.

What do you think about Kris’s bikini selfie, HollywoodLifers? Between her and Kim, who do you think is the selfie queen?