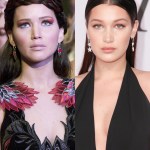 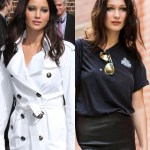 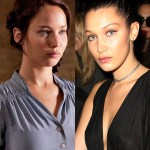 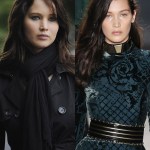 You know Bella Hadid has a sister, Gigi, but did you know she has a twin?!? Okay, not really, but based on how similar she and Jennifer Lawrence look you would totally believe it! Here are all the times we just couldn’t tell the two apart!

Jennifer Lawrence, 27, and Bella Hadid, 21, have completely different personalities — but very similar facial features. The hotties have been confused for each other in photos on more than one occasion and we honestly can’t blame anyone who believes they might be related. The gorgeous model and bombshell actress both have killer cheekbones, light, sparkling eyes, and — at one point or another — similar hair hues, whether it be platinum blonde or silky raven.

Just look at the pics of the pair side by side in the gallery above and try and tell them apart. There are photos of Jen from when she first rose to prominence playing Katiness Everdeen in the Hunger Games to the Oscar-winning actress she is today; and pics of Bella from when she was just starting out as a young model to her career now, rocking haute couture on the runway. Through it all they can be seen pouting at the camera or smiling brightly and we have to do a double take to tell who is who!

Back in November 2015, Bella herself even admitted the resemblance is uncanny. “I never saw it, but there are some photos that it’s really weird, and we look very similar,” Bella told Seventeen. “People say it all the time. I’ll walk onto set and five people will say, ‘You know who you look like?’ and I’m like, ‘Jennifer Lawrence?’ then they’ll say, ‘How’d you know I was going to say that?’ and I’ll go, ‘Because I hear it five times a day.'” So cute!

HollywoodLifers, do you think Bella and Jennifer look alike? Let us know below!