Blackbear, 26, might have just stepped out for a cigarette while chilling in Los Angeles on July 20, per Daily Mail, but the smoke break turned into something much cuter when Bella Thorne, 19, joined him. As Blackbear (born Matthew Musto) was getting his nicotine fix, Bella decided to lean in and plant a smooch…on his shoulder! It was rather sweet. After seeing this adorable PDA, is it any wonder why some think that Bella and Blackbear are the hottest new couple? What would their couple name be – “Bellabear?”

This romantic smoke break came one day after Bella flaunted her love for the “Wanderlust” rapper across her chest. After partying with her other rumored bae, Scott Disick, 34, in New York City, Bella returned to La La Land while wearing a Blackbear hoodie. Bella has said she’s never been with Scott “sexually,” and even if she has been, it looks like she’s moved on. In addition to this cigarette smooch, Bella was spotted holding hands with Blackbear while at The Filmore on July 8, right before she was seen cuddling up to him in a steamy Instagram pic. It certainly looks like Bella’s smitten with Mr. Bear.

Well, considering how she’s seemingly a drama-magnet, Bella could use the joy of a new love in her life. The latest so-called-scandal came when someone posted an alleged sex tape featuring the Famous In Love actress. The raunchy clip showed a woman pleasuring herself while moaning something about “needing a father.” That last part was really, really gross and Bella seemed to agree. She jumped on Twitter to drag the video, laughing at people who thought it was really her. 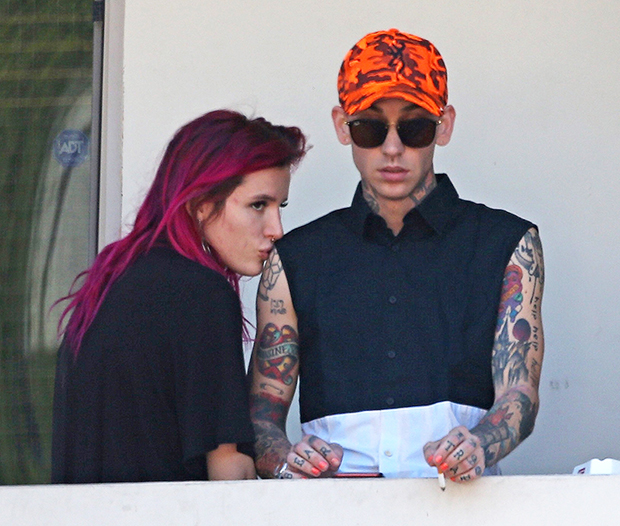 “I don’t even masturbate like that,” she said. Uh, Bella? TMI. She wasn’t laughing when she tore into the video for making fun of her father’s death. Bella’s dad was killed in a car crash in April 2007, according to Us Weekly. The death still haunts her to this very day, and she blasted the sex tape impostor. Bella could handle the sexual content, but when someone “making fun of the fact that I lost my father,” that’s where she draws the line. Well, thanks to Blackbear, she seems to have a new shoulder to lean on during these hard times.

What do you think about Bella and Blackbear, HollywoodLifers? Do you think they’re a cute couple?