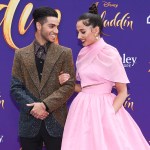 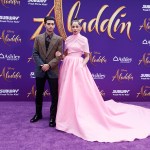 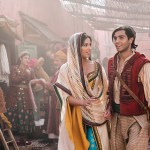 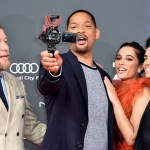 Say hello to your new Aladdin and Princess Jasmine! It was revealed at the D23 expo that Naomi Scott and Mena Massoud will star in the upcoming live-action remake. Here’s everything you need to know about them!

1) Naomi Scott with play Aladdin’s love interest Princess Jasmine. The casting process wasn’t easy, as over 2,000 people auditioned for the leading roles to star in Guy Ritchie‘s highly-anticipated remake. Naomi, 24, looks the perfect actress to play Jasmine with her long, brown hair and sexy bedroom eyes, but sadly Agrabah is not her hometown. She comes from a mixed heritage with a British father and an Ugandan mother. Naomi spent most of her life in London.

2) She already has an established relationship with Disney. Even though Naomi is a relatively fresh face in the acting community, she’s been tied to the network since 2011. The brunette bombshell starred in the Disney Channel Original Movie Lemonade Mouth, a family film about five students who meet in detention and form a band to deal with their struggles outside school.

3) Mena Massoud will play Aladdin, obviously. He’s a little less known than Naomi but that’s all about to change! Before the Canadian makes his Aladdin debut, he’ll star in Amazon’s Jack Ryan series opposite John Krasinski from The Office. Mena has also appeared in Nikita, Open Heart, and Saving Hope. His future projects include Strange But True with Amy Ryan.

4) Ladies, take a deep breath before seeing Mena shirtless. If you’ve re-watched the original Aladdin as many times as we have, you’ll remember that he doesn’t wear a shirt. It’s more of an open vest. This is good news for women around the world because Mena is a fitness buff and has insane abs!

5) Guess who Mena and Naomi’s co-star is! Aladdin has so many memorable characters but the funniest one has to be Genie! Originally voiced by the late Robin Williams (shedding tears right now), Genie will now be played by Will Smith. No word yet on if he’ll wear an all-blue suit and paint his face.

HollywoodLifers, are you excited to see Naomi and Mena in the upcoming Aladdin?