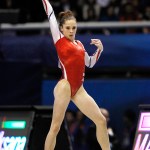 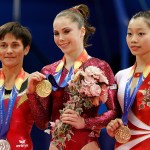 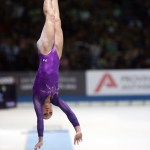 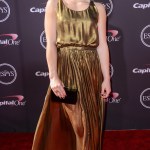 McKayla Maroney deserves a gold medal in dancing, too. The Olympic gymnast showed off some seriously sexy moves ahead of filming a music video with Wade Hampton. This girl can bend like crazy!

If dancing were an Olympic sport, McKayla Maroney, 21, would take home the gold! The medalist just crossed over into the world of music after starring in a music video for Wade Hampton on July 12 — and the behind the scenes footage is almost too sexy to handle. On set, McKayla shook her booty in a pair of white pants with high slits going up both sides, a motocross crop top, and a sleek braid. She accessorized with large hoop earrings, a fresh manicure, and coats of mascara. “Filming a lil’ music video with @wadeahampton today,” the captioned the pic. The aspiring singer will only make a cameo appearance this time, but we’re about to see a lot more of her in the future!

McKayla has been working on her own music, looking to icons like Taylor Swift and Drake as inspiration. “I like to say my genre is vulnerable pop because it’s all melody and lyrically driven and heart driven,” she told Us Weekly in 2016, adding that her favorite thing to sing about is love. She dropped single “Ghost” on September 8 and it was a massive hit! Perhaps the reason she loves writing romantic lyrics is because she had no time for dating while competing for gold. “You’re so dedicated and committed,” she told the publication. “I mean, I was in the gym for like eight hours a day and then outside of that I’d be doing school.”

OK, so she can sing, dance, and do crazy backbends. Anything else? Yes actually. As an all-around athlete, McKayla loves to try new sports to keep her in shape. The brunette beauty posts many selfies from the tennis court and even plays indoor soccer when she has the time. This girl is a powerhouse!

HollywoodLifers, are you excited to see McKayla in Wade’s music video?