Paris Jackson revealed she got a new tattoo in honor of her iconic father Michael Jackson that will just melt your heart! We’ve gathered up four other touching ways she’s stood by her dad!

Paris Jackson added another tattoo to her body art collection and this one was all about her father. She had the word, “Applehead” written in on the top of her foot. Paris and others close to her dad Michael Jackson used to call the famed music artist by the sweet nickname. The 19 year-old shared an emotional message beneath the Instagram of her tattoo. “With every step i take, you lift my foot and guide me forward. love you 🍏,” she wrote.

Paris has always been very protective of her dad’s memory. She has defended Michael whenever people raised doubts about him. Some people even speculated that Paris was not Michael’s biological daughter. She shot those rumors down in her interview with Rolling Stone. Michael told her, “‘You’re black. Be proud of your roots.’ And I’d [Paris] be like, ‘OK, he’s my dad, why would he lie to me?’ To my knowledge, he’s never lied to me.”

She also was beyond upset that Caucasian actor Joseph Fiennes, 47, played her African American father in the TV movie Urban Myths. “I’m so incredibly offended by it, as I’m sure plenty of people are as well, and it honestly makes me want to vomit,” wrote on Twitter. Paris even refused to allow anyone to “slander” Michael after an 88-page report from the Santa Barbara Country Sheriff Department surfaced in June 2016. She “urge[d] all to ignore the trash” about the disturbing images in the video and report. Paris also she believed her father was murdered. She remembered him telling her, “They’re gonna kill me one day.” Paris admitted, “it sounds like a total conspiracy theory and it sounds like bullshit, but all real fans and everybody in the family knows it. It was a setup. It was bullshit,” she told Rolling Stone. 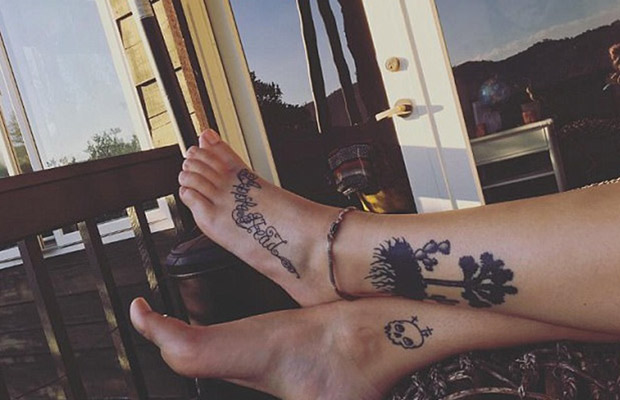 HollywoodLifers, what do you think of Paris’ new tattoo?