Welcome to date night — Curry style! Steph, 29, and Ayesha Curry, 28, are legit relationship goals. The adorable couple stepped out without their kids — Riley, 4, and Ryan, 1 — for an adult date on June 15! The pair were spotted outside Hollywood hotspot, Delilah, where they were joined by Steph’s sister, Sydel. The couple hit up the lavish nightclub with friends, including Utah Jazz star Rudy Gobert, 24, and others.

And, you’ll never guess who was also inside Delilah, partying it up with the NBA Champ — Drake! TMZ ran into the rapper’s father, Dennis Graham, who was also at the club, and he said that Drizzy rented out a private room inside the club. Because, why not? Adding to the roster of famous faces, Jamie Foxx, 49, may have been in on the action as well. The actor’s standout, gold Bugatti [or a look-a-like model] was spotted driving into the parking lot of Delilah. However, it’s unclear if it was Jamie behind the tinted windows.

Steph held a cigar in one hand and his wife’s hand in the other while they strolled into the CA nightclub. The Dubs’ star point guard has been puffing on cigars since he won his second ring on June 12. During a post game interview, he smoked a cigar on live TV! — Because, that’s what you do when you’re a two-time NBA champion. 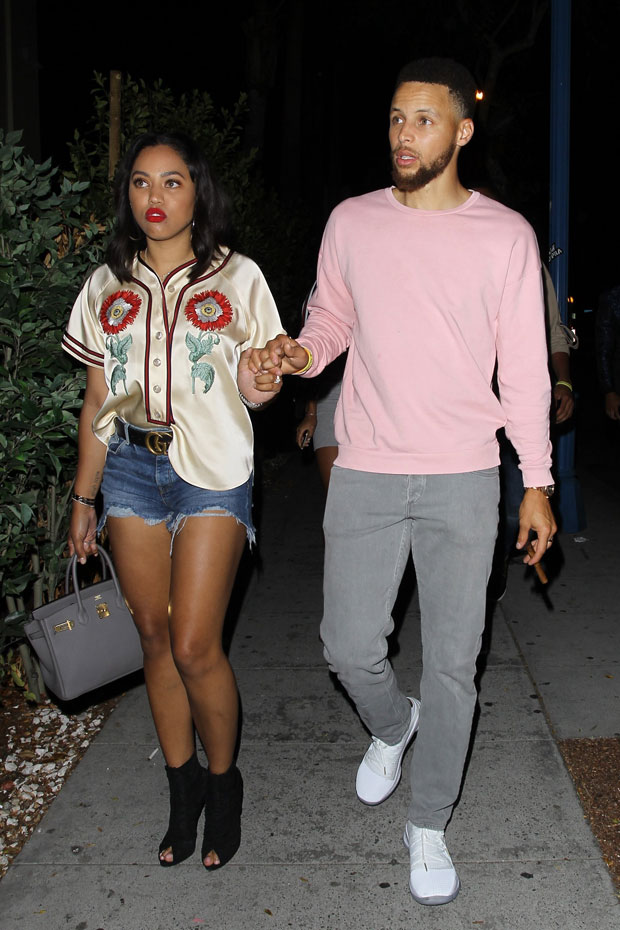 Anyway, Steph and Ayesha were dressed to the nines for their date night. He rocked grey pants and a pale pink long-sleeve. And, to the best part of the night — Ayesha. “The Seasoned Life” author wore a silk, baseball style button-up with floral prints. Ayesha rocked short, jean daisy dukes, where she showed off her incredibly toned legs.

The stunning chef has seriously never looked better and she told HollywoodLife.com how she’s been getting into amazing shape! “Since Jan. 1, I’ve lost 17 pounds,” Ayesha EXCLUSIVELY told us in NYC, April 25. As for her workouts? — “I like to mix it up because I get bored.,” she said. “So, I’ve been doing boxing, interval training, MDR classes and pilates. I’ve been going hard.” And, don’t even bring up diets, because Ayesha isn’t a believer in them! “I believe everything is OK in moderation and portion control is the most important part of my meals,” she explained. Ayesha’s obviously doing it right!

Steph and Ayesha’s night out came on the same day they rode around downtown Oakland for the Warriors victory parade. The couple brought their two children along for the NBA title celebrations and the family had a blast. And, they weren’t the only ones. Draymond Green, 27, was also the star of the parade, when he showed up in a “Quickie Loans” t-shirt intended to mock the Cavs. He even stirred up a bit of playful beef with LeBron James, 32. You can get that scoop, right here.

HollywoodLifers, did you have the Warriors in 5?