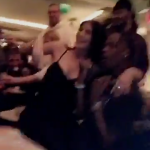 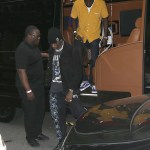 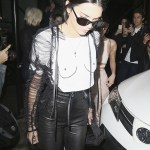 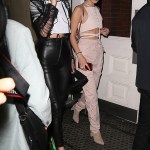 HAPPY BIRTHDAY, TRAVIS SCOTT, 25! The night of April 30 turned into one massive celebration between the rapper and a group of his famous friends, including Bella Hadid, Jordyn Woods, and of course girlfriend Kylie Jenner, 19. Hot lounge, Socialista, in New York was absolutely packed to the rim with Hollywood stars, who were all there to grant the “Antidote” rapper with well-wishes on his 25th year around the sun. It also turned out to be an adorable double date between Kylie, Travis, Kendall Jenner and A$AP Rocky.

This may be the first time the famous sisters have hung out together with respective (rumored) boyfriends. Travis and the LipKit creator sealed the deal at Coachella a week ago by holding hands as they walked through the crowd. Kendall and A$AP, however, have yet to go public with their alleged romance. That being said, both reality stars reportedly found love at that music festival in Indio, California. Partygoers said the supermodel was singing along to A$AP’s music while he performed on stage, while others claim they say Kylie and Travis making out during Dillon Francis‘ set.

But the birthday fun doesn’t stop there! Just a few hours before heading out to dinner, Travis and the makeup maven packed on the PDA in Boston, where the hip-hop star performed a concert at Bentley University. Afterwards, the pair could barely keep their hands off each other at Bijou nightclub, according to TMZ. They were basically inseparable, except for the time that Travis had to get up on stage. Sorry Tyga, we know this isn’t exactly what you want to hear…