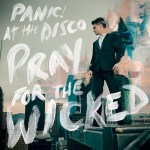 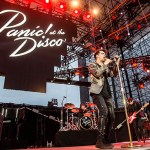 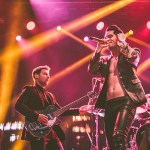 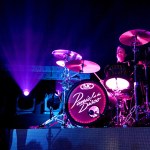 Panic! at the Disco’s Brendon Urie is heading to Broadway, and we caught him in the five spare minutes he had between that and the wildly successful ‘Death of a Bachelor’ tour. Here, he reflects on the amazing journey that got him to a sold-out Madison Square Garden show.

This conversation with Brendon Urie of Panic! at the Disco has been edited and condensed for clarity.

What were the highlights of the Death of a Bachelor Tour for you?

One thing we do every night is have fans hold up hearts during “Girls/Girls/Boys.” One time, in Oakland, they made it look like the Pride flag in the crowd. It was phenomenal.

What was it like to play a sold-out show in NYC?

Playing Madison Square Garden was so crazy. It was the first time; we usually play the Theater, which holds about five thousand, but this time it was the full MSG. I grew up watching acts like Billy Joel and Led Zeppelin — people I have grown up to and worshipped my whole life. Finally being on the stage and in that room with the sweat and the ghosts in the hall…it was crazy!

“Death of a Bachelor” is an incredible record, and it was nominated for a Grammy! Congrats.

I am really proud of this one because it was more of me doing my own stuff; less dictation. It sounds shitty, but I am kind of like a dictator and do whatever I want and nobody can tell me no! I love it! We all just got tattoos actually because of this tour and the album.

Thank you @richiebon for coming out today in San Diego and doing our tour tattoos. Original artwork by @samanthakangel #DOAB 📸- @jakechams

What would you be doing if you weren’t a musician?

I would still play music, though it probably wouldn’t pay the bills. I actually almost quit the band in the very beginning right before we got signed. I was going to be a cosmetologist — cutting hair and doing makeup! Or maybe working for my dad as a land surveyor. I did that for six years and that sucked!

You’ve been open about how you were bullied in your high school days. How did you overcome that?

The kids that bullied me got bullied by their parents. One kid, Corey Johnston — which I don’t have a problem saying his name, I don’t care if this gets back to him — and this guy John Evans would beat me up every f*cking day. It was out of jealousy, because I was a grade younger than one of the guys and I beat him for drum chair in jazz band.

What kind of changed my mind was in school I heard that Corey’s dad was abusive to him and it creeped down. I would never want to continue that vicious cycle. It’s so scary to not give into the reflex to fight back, but you keep in mind that as tough as it is, you don’t have to be that way. You need to stray away from that.

What’s the craziest party you’ve ever been to?

Oh, man. I want to say the name so bad. I went to a Halloween party like two years ago; invitation-only so I felt so cool! I was with my wife and friends and it was like walking into a movie. It was crazy! People were in character, like the interactive play Sleep No More. We walked through this dude’s house…more like mansion, estate or fortress. Each level was a different room or experience or haunted house. I met Sacha Baron Cohen and his wife there. They were cool!

How do you feel when you look back on what it took to get to where you are now?

With fondness! It’s nice to have scrapbooks and I save every tour laminate and every award and every hotel key I’ve ever used. I have like five shoe boxes full of every hotel I’ve ever stayed at. Things like that, I like keeping memories and holding onto things that are astonishing to me. I can look back at the pure numbers of it all and realize I have been doing it for 13 years and that is f*cking crazy! It’s really insane, but it makes me even more grateful for where I am at. I appreciate it.

Brendon will make his Broadway debut in Kinky Boots on May 26. Get tix now!