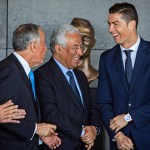 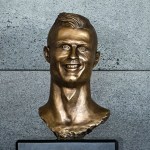 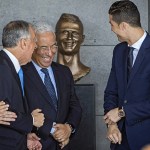 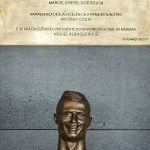 Cristiano Ronaldo is an insanely handsome man. But his new statue? Not so much! The bronze sculpture revealed on March 29 could easily make babies cry and dogs start barking. Yeah, it’s that freaky. See for yourself, here!

Brace yourselves soccer fans, because you are NOT going to like this! One of the best (and sexiest) players got a new statue on March 29, and saying that it didn’t do him justice would be an understatement! Cristiano Ronaldo, 32, was honored that the Madiera Airport was renamed after him, but he was probably less thrilled when they unveiled his new bronze figure that would look over the busy terminal. Click through the gallery above for more pics of it!

The questionable bust hardly looks like the football star at all. It has a thick neck, beady eyes, a crooked, menacing smile and a ginormous chin. Yikes! Though Cristiano graciously posed with the statue, shook hands, and even tweeted “happy and honored to have my name given to the Madeira airport!” we can’t help but think his face seems a little too solemn for the joyful occasion.

The internet had a field day with the shocking figure. Fans immediately began mocking it on Twitter, comparing it to “Sloth from the Goonies” and “Niall Quinn.” Poor guy! Here are some of the best reactions:

When you send the statue guy a picture of Niall Quinn instead of Cristiano Ronaldo #Awkward 😂 pic.twitter.com/0VR8qPskVF

For a very handsome man, Ronaldo has had some appalling luck with statue-makers pic.twitter.com/M74YEDng4c

Some of the all-time great Cristiano Ronaldo moments pic.twitter.com/57Tx9VhbUm

The Cristiano Ronaldo bust at the airport carrying his name. This is Art Attack… pic.twitter.com/tTVmQBMgms

"You got a pic of Ronaldo for this bust?"

"Nah…got 1 of Sloth from Goonies tho?"

I apologize. There's been a huge mistake made on the new bust of Cristiano Ronaldo at Ronaldo Airport in Portugal. THAT'S EVEN WORSE! pic.twitter.com/Mi4iFpGGRn

Surprisingly, this isn’t Cristiano’s first statue gaffe. The larger-than-life figure that stands in front of his museum is also a little… funky. While the face is accurately handsome, onlookers can’t help but be distracted by the massive bronze bulge sticking out of his tight athletic shorts. Yes, seriously! We’re sure he’s less bothered by having an unusually big penis on his statue than a messed-up face, but still: this guy can’t seem to catch a break!

HollywoodLifers, do you think Cristiano’s new bust is hilarious, or totally inappropriate? Let us know!