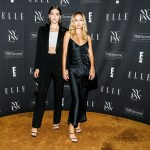 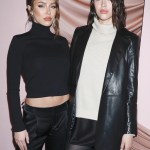 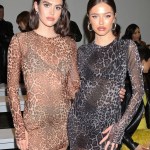 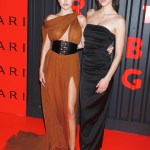 Watch out, Gigi and Bella Hadid, there’s a new sister duo in town! Delilah and Amelia Hamlin made a splash during fashion week, and they’re already poised to be the next big sibling supermodels. Get to know the girls with our five fast facts, below.

1) They’re already familiar with the spotlight thanks to their parents.

Delilah Hamlin, 18, and Amelia Hamlin, 15, are the daughters of actors Lisa Rinna, 53, and Harry Hamlin, 65. Lisa, of course, has appeared on the Real Housewives of Beverly Hills with Gigi Hadid and Bella Hadid‘s mom Yolanda Foster, so the sisters grew up knowing each other.

2) Delilah made her runway debut at the Tommy Hilfiger Spring/Summer 2017 show.

While the girls’ moms have had their fair share of drama on RHOBH, there appears to be no bad blood between their daughters. In fact, Delilah walked the runway at Gigi’s first collaborative show with designer Tommy Hilfiger during New York Fashion Week, and she sat front row at their second show together in LA this winter with her younger sis and mom.

3) They take their modeling advice from the pros.

Not only do they share the same sartorial taste as the Hadid sisters, but they also look up to Gigi and her famous modeling crew. In an interview with the Los Angeles Times, Delilah shared that “Gigi [Hadid] taught me how to do the model walk,” she said. “That was cool and I definitely look up to her and Kendall.”

Just like Gigi and Bella, Delilah and Amelia also have a brother! But while Anwar Hadid is the youngest to break into the modeling world, at 36, Dimitri Hamlin is actually the oldest sibling. He even appeared in an Abercrombie & Fitch catalog back in 2004 alongside Taylor Swift.

5) They love a beauty look.

Similar to the Hadid girls, the Hamlin sisters’ go-to looks are centered around relaxed, beachy beauty. But they also enjoy a bit of glam, with Amelia sharing an Instagram pic of a glitter look that’s made for festival season, and Delilah sharing with Teen Vogue that she enjoys playing with makeup, too. “My highlight game is strong,” she told the mag. “I over-highlight so much. Every time I hang out with my friends, I recruit them to help, but I also know how to do it on my own,” Delilah said.

Gigi famously works with Maybelline, while Bella just joined Dior Beauty, so perhaps Delilah and Amelia will be landing makeup contracts of their own in the near future?

What do you think, HollywoodLifers? Are Delilah and Amelia the next Gigi and Bella?