Madelaine Petsch, 22, is wearing a curve-hugging bodysuit made entirely of bok choy in the brand-new ad for peta2 and looks absolutely fabulous. The ad’s catchy tagline reads: “Turn Over a New Leaf—Go Vegan.” During the photo shoot, Madelaine talks about why being a vegan works for her.

“I turned vegan [at] 14,” she says in the interview with peta2. “I felt a lot healthier. I didn’t feel as lethargic because I wasn’t eating milk or eggs.” She also reveals her favorite vegan snack and place to eat in the video. If you want to know more about going vegan, peta2 offers a free Guide to Going Vegan on its website. 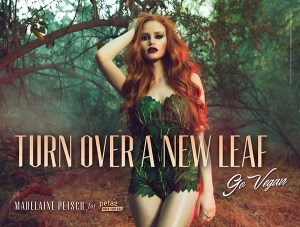 The actress joins a growing list of celebrities, including Krysten Ritter, Corey Fogelmanis, Skylar Stecker, Torrey DeVitto, Hayes Grier, Laura Vandervoort, and many others, —who’ve teamed up with peta2. The motto for peta2 reads, “Animals are not ours to eat, wear, experiment on, use for entertainment, or abuse in any other way.”

Madelaine is taking over TV with her role as the sassy and sultry Cheryl Blossom on Riverdale, based on the legendary Archie Comics. Cheryl is this generation Blair Waldorf for a fact, and that’s all thanks to Madelaine. Madelaine steals every single scene she’s in on the hit CW show. Riverdale airs Thursdays at 9 p.m. ET on The CW.

HollywoodLifers, are you vegan or considering becoming a vegan? Do you watch Riverdale? Let us know!

Related: Idina Menzel’s Husband: Everything To Know About Aaron Lohr & Her Marriage To Taye Diggs