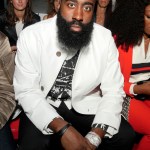 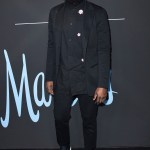 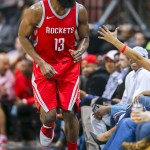 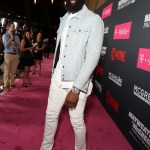 There’s too much evidence to ignore: it really seems like James Harden and Ashanti might be dating! We’re so here for this sexy new ship, and you will be too when you see all of the adorable proof! Check it out for yourself, right here.

Make way for Jashanti! Or Asharden? Maybe Hardanti? We can work out the details later, what matters is that there’s mounting evidence that R&B singer Ashanti, 36, and NBA baller (and Khloe Kardashian’s ex) James Harden, 27, may very well be in a secret relationship together!

So I'm at Hyde in the Bellagio in Vegas and James Harden is there with Ashanti.

MediaTakeOut did the research: it seems like these two may have been hanging out since a fan spotted them getting cozy over 4th of July 2016. Just weeks later, she was spotted showing support at the James Harden Vol. 1 event. From there on out, Ashanti has been spending a LOT of time in Houston, as you can see on her Instagram. That includes on Valentine’s Day! She’s alone in the photo, but she certainly looks dressed for a sexy date night, and what else would she be doing in Houston?

It’s a lot of evidence, but if they truly have been dating for almost a year, then they’re the most low-key couple ever to keep it secret for so long! James has even been linked to another woman as recently as Jan. 2017, when he was reported to be dating sexy Instagram model Jessyka Janshel, 26. Perhaps that was all for show?

When you play the game right… @moschino

Personally, we would love to see James and Ashanti make it official. Before her rumored romance began with James, she was dating another baller – NFL player Darnell Dockett – on and off for a year. The gorgeous star definitely deserves a more devoted partner, and we think James could totally be the one for her!

HollywoodLifers, do you think that the evidence points to Ashanti and James dating? Let us know!