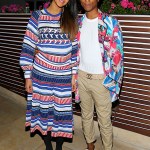 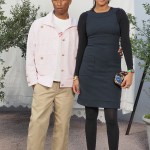 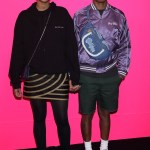 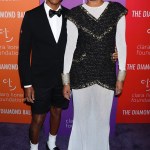 Pharrell Williams and Helen Lasichanh are definitely one ‘Happy’ couple, as they’re the proud parents of three new bundles of joy! Helen welcomed triplets into the world, so get to know all about the stylish woman who happens to be Pharrell’s better half.

1. She’s known for being mysterious.

When a rep for Pharrell Williams, 36, and Helen Lasichanh, 36, confirmed that she gave birth to three babies in Jan. 2017, it may have been the first time some fans actually heard her name. She deliberately keeps a low profile, according to The New York Post, and while she attends every major event with Pharrell, she rarely says more than a few lines to the press.

2. Helen is considered to be a gorgeous style icon

If you’re looking for a reason as to why Helen shies away from the microphone, maybe she thinks a picture’s worth a thousand words? After all, she’s considered a fashionista and her wardrobe choices have received some high praise from a few of fashion’s biggest stars.

“I love her style!” André Leon Talley, 67, former contributing editor at Vogue, once said. “They’re totally into Chanel and Louis Vuitton, but they mix it to make it their own unique style. Helen has this extraordinary quality where she can dress to the nines for the red carpet, or she can go around here with leggings”

3. She was a college sports star.

Helen has been called a model, a stylist and a designer, but a lot of mystery still surrounds her. What is known is that she attended high school and college in Miami Florida, and she was a star player on the St. Thomas University’s volleyball team. She even won the Florida Sun Conference’s Player of the Year award in 2001!

4. Helen made Pharrell work to earn her love.

Supposedly, when Pharrell and Helen first met, she had a boyfriend, according to SheKnows.com. They stayed friends until she was single, and even then, she played hard to get by not responding to his texts. That just seems to make him want her more!

5. She just doubled their family.

She and Pharrell welcomed their first child, Rocket Williams, 8, in 2008 and in 2013, they had a surprise wedding. It seems this couple’s whole theme is do stuff in secret! The couple never officially announced her pregnancy, but everyone saw her proudly debut her baby bump at a Sept. 2016 Chanel-hosted dinner in Los Angeles. Now, with the addition of triplets, this family of three just turned into a clan of six!

What do you think about Helen, HollywoodLifers?