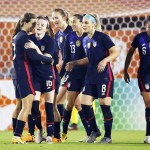 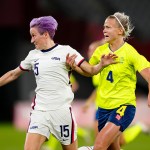 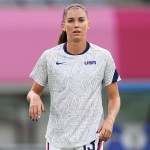 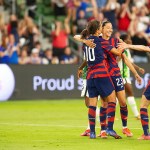 Alex Morgan knows her worth! The US women’s soccer forward claims she and her team ‘are not scared’ to strike if they have to for ‘equitable treatment’ and pay. The star athlete revealed that FIFA needs to start ‘respecting’ women’s soccer, and she didn’t hold back on the issue. Let’s discuss this…

The US women’s soccer team began their fight for equal rights and pay for female athletes in March 2016, and they are still on that mission. The collective bargaining agreement [CBA] discussions between US soccer and the women’s national team, expired at the end of 2016, and neither side has revealed if a deal is even close to being made. But, Alex Morgan, 27, admitted that a strike could be a possibility on their journey to acquire equitable treatment, Jan. 16. Wow.

“It’s necessary for change sometimes,” Morgan said to The Guardian, of a possible strike. “It wouldn’t be the first time women decided to strike… To force a change sometimes you need to stand up. You know what you’re worth — rather than what your employer is paying you. We’re not scared. To move the women’s game ahead we need to do what’s necessary. I feel other national teams are looking at us for that guidance.” Then, she brought Hollywood into the mix…

Morgan mentioned Jennifer Lawrence, 26, when she said, “It’s great to see women standing up in their own line of work and fighting for fair value.” The soccer star was referring to Jennifer’s 2015 letter, where she discussed the wage gap in Hollywood between men and women. This was a result of the Sony hack, where it was revealed that Jennifer made a substantially less amount of money than her male co-stars for her work in American Hustle, a film in which she earned and Oscar nomination for.

Morgan admitted that she and her US women’s soccer team are “trying to do the same thing” that Jennifer did, and fight for their equal rights and pay. “We’ve come a long way,” Morgan said, however, she admitted that it can get “exhausting” to have to “prove yourself and show your worth, every day, every week.” Ugh.

Regardless of how hard it may be, she isn’t ready to give up on their fight for equality. Right now, Morgan is playing soccer at Olympique Lyonnais in France. And, although she is away, she said she will be “very active in our fight for the new agreement.” You go, girl!

As for her take on FIFA? [the International Federation of Association Football] —  “I don’t think the entire world respects women in sport. But if FIFA start respecting the women’s game more, others will follow,” Morgan said. Mic drop! Although US soccer and the women’s nation team have yet to close a deal, she claimed, “Our current battle in the US will get resolved.” We sure hope so!

The US women’s soccer team has claimed they have been discriminated against, paid less and treated worse, next to the U.S. men’s team, according to CBS News, who sat down with captain, Carli Lloyd, 34, and her fellow teammates, Becky Sauerbrunn, 31, [co-captain], Christen Press, 28, and Morgan Brian, 23, in Nov. 2016. Earlier in 2016, members of the team filed a complaint in March with the Equal Employment Opportunity Commission (EEOC), the federal agency that monitors employment discrimination. They argued that US Soccer had broken the law in paying them less than their male counterparts. The women have been fighting for equal pay rights and treatment ever since.

Women’s equality rights within the workplace and beyond continue to become a bigger issue within our nation. From actresses, to athletes and individuals all over the world — Women have been speaking up and joining the mission to be treated equally. Do you agree with Morgan about the possibility of a strike for the women’s soccer team to finally be paid what they’re worth?

HollywoodLifers, do you think the US women’s soccer team should strike? Tell us your thoughts below on this important issue!