Wow, just wow! We didn’t think it was possible for Margot Robbie, 26, to look anything less than gorgeous, but she’s managed to wipe away all of her glamorous sizzle to play disgraced figure skater Tonya Harding, 46. In pictures of the actress on set Jan. 13, she’s doing her best to own a pair of early 90s high-rise mom jeans, but we can’t get over how she’s transformed her long, lean body. Tonya was short and muscular, so the Suicide Squad star is wearing extra heavy body padding to play the more full-figured athlete! 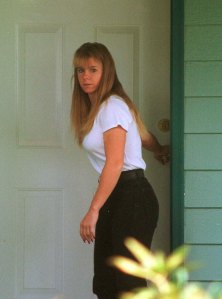 Margot absolutely nails Tonya’s blonde, frizzy hairstyle from back in the day. The skater was never really a style icon the way her polished rival Nancy Kerrigan, 47, was, and the Aussie actress looks positively drab with the awful hair and dull blue sweater. She can be seen toting an umbrella to shield herself from the rain on set, but all that water in the air is probably helping add to the unkempt frizz on her head!

The Wolf of Wall Street actress is playing the title role in I, Tonya, a film about the Oregon native’s scandal involving a plan hatched with then-husband Jeff Gilloolly to hire a hitman to break rival Nancy’s leg just before the U.S. Olympic figure skating trials in 1994. A friend of the couple’s attacked Nancy after she had just finished practice, striking her with a baton on her right knee and knocking her out of the competition. Nancy was able to recover and won the silver medal at the Lillehammer Winter Games while Tonya — who was already under suspicion in the attack — finished eighth. After their plot was exposed, Jeff — who will be played by Avengers star Sebastian Stan, 34, in the film — went to jail for two years and Tonya was banned for life from competiting by the U.S. Figure Skating Association. This is such a juicy story and we can’t wait to see the film!

HollywoodLifers, are you looking forward to seeing Margot play Tonya?