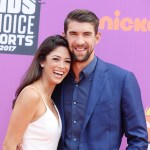 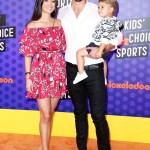 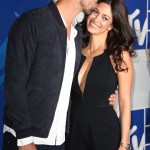 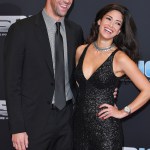 So gorgeous! Michael Phelps and Nicole Johnson may have already been legally wed, but they got married again during a romantic ceremony in Mexico on Oct. 29. And afterwards, the Olympic athlete and his wife shared pics on social media! We have the stunning pics, and details, here.

Congratulations — again! Michael Phelps, 31, and Nicole Johnson walked down the aisle and exchanged vows for the second time, during a lavish outdoor ceremony in Cabo San Lucas on Oct. 29, just four months after they secretly obtained a marriage license. After the ceremony at the El Dorado Golf & Beach Club, which took place in front of their friends and family, Michael and Nicole posted some stunning pics from the wedding on social media. One shows them walking down the aisle with son Boomer in the background, while another shot (seen above) shows Michael and Nicole walking hand in hand near the ocean. Nicole wore a gorgeous dress by designer Julie Vino, calling it her “dream dress.” So romantic!

The news of the hot couple first getting married broke on Oct. 26, and a day later, the gold medalist confirmed the happy news himself. “I’ve been married for awhile, a couple months,” he admitted in a Facebook Live video. “I had to keep it a secret from y’all. But Nicole and I are officially married and now we are getting the chance to just kind of kick it and hang out now.” They actually obtained their marriage license on June 9 and tied the knot six days later, according to TMZ — meaning he was married while competing at the 2016 Rio Olympics!

During his Facebook Live interview, the hunky swimmer also revealed revealed that his adorable 5-month-old son, Boomer, may become a big brother soon!  “Baby number two may be coming soon. Who knows, though?” he teased. I guess we’ll have to wait and see, but for now, we’re so happy to see the couple’s beautiful wedding pics.

HollywoodLifers, what do you think of Michael’s pic from their secret wedding ceremony? Let us know below.