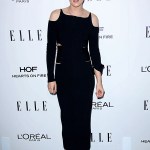 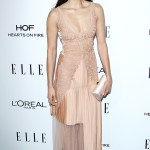 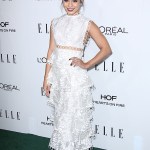 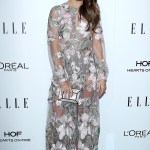 OMG! The ‘Elle’ Women in Hollywood Awards staged the most epic ‘Twilight’ reunion. Kristen Stewart, Anna Kendrick, Dakota Fanning and Nikki Reed were all in attendance, and Kristen and Anna took some time to chat! Click to WATCH the amazing video!

Kristen, 26, and Anna, 31, met up to catch up with some quality girl talk. In an Instagram video, Kristen and Anna laughed and smiled during their chat. It was like no time had passed! Lupita Nyong’o, 33, was also in their tiny Twilight circle.

While there’s video evidence of a Bella and Jessica reunion, Twilight director Catherine Hardwicke, 61, Dakota Fanning, 22, and Nikki Reed, 28, who played Jane and Rosalie, were also at the event. This event, held at the Four Seasons in Beverly Hills, was a Twilight fan’s dream come true! Considering both Nikki and Kristen dated Robert Pattinson, 30, at one point, that could have been one awkward run-in!

All of the Twilight ladies look absolutely stunning at the event. Kristen rocked a black Roberto Cavalli dress that revealed her bare shoulders. Her smokey eye and slicked-back hair looked gorgeous! Anna wowed in a blue velvet dress by Gabriela Hearst. Dakota and Nikki were beautiful in a short yellow dress and sheer floral frock.

The Elle event was held to honor eight female actresses — Kristen, Anna, Lupita, Amy Adams, 42, Aja Naomi King, 31, Felicity Jones, 33, Kathy Bates, 68, and 71-year-old Helen Mirren — on the cover of the magazine. Basically, the Twilight girls are killing it in Hollywood. The women were chosen based on their contributions to empowering women in Hollywood.

This just make us miss the Twilight days even more. For all the die-hard fans out there, you can actually own a piece of the Twilight movies. Costumes and props, including Bella’s engagement ring, are going up for sale in the upcoming Twilight Saga Auction.

HollywoodLifers, what are you thoughts on this Twilight reunion? Do you want there to be more movies? Let us know!