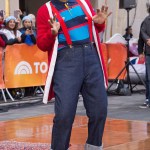 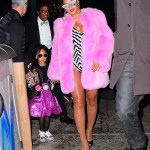 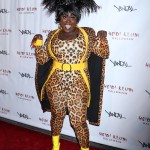 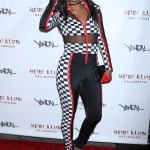 Are we seeing double? Scott Eastwood paid tribute to dad Clint Eastwood by wearing his getup from his classic western, ‘The Good, the Bad and the Ugly’ for Halloween! How cool!

When your father is one of film’s most iconic actors, you already have an arsenal of costumes at the ready for when you need inspiration! Scott Eastwood, 30, pulled from dear old dad’s archives and paid tribute to his character from the 1967 western The Good, the Bad and the Ugly, Blondie, for a Halloween bash on October 15.

It was spot on, too! Seriously, seeing this photo of Scott dressed up as Blondie for Halloween is like taking a trip through a time machine. Are we sure this isn’t actually a photo of Clint Eastwood (now 86) himself? He’s got the whole outfit nailed down: denim shirt and jeans, leather vest, double leather belts, cigar, and wide brimmed hat. The poncho even almost has the same pattern!

Scott wore his costume to Seth Rogen‘s Hilarity for Charity foundation’s 5th Annual Los Angeles variety show. So many other celebs showed up in full costume and looked amazing for the event at the Hollywood Palladium that benefited Alzheimer’s research. Seth and his wife, Lauren Miller, showed up as Mario and Luigi, while Joseph Gordon Levitt performed as a blood-soaked cowboy. Katie Stevens from Faking It was an adorable Mary Poppins, and Courtney Love was pretty much just there as Courtney Love!

There’s no doubt about it that Scott attracted a ton of lovely ladies at the event wearing his hot costume! He’s known as a bit of a player, having been seen galavanting around Los Angeles with Charlotte McKinney, then at Austin City Limits with a mystery girl! He said on a recent episode of Ellen that he’s single and ready to mingle, and we believe him!

HollywoodLifers, do you like Scott’s Halloween costume? Tell us in the comments!