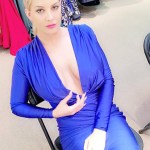 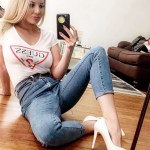 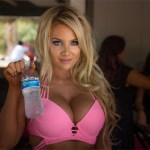 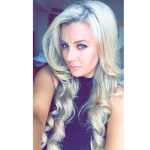 Model/actress Baylee Curran set off a firestorm in Chris Brown’s world when she called police to say he threatened her with a gun at his Tarzana, CA home. We’re getting to know the beauty queen who helped set the standoff in motion so here’s a look at her in pics.

Baylee Curran, 25, has made more headlines for accusing Chris Brown, 27, of pulling a gun on her than she has for any of her acting or modeling work. But there’s plenty of it as you can see from our photo galley. The beautiful blonde flaunts her hot bikini body in a skimpy pink number while appearing to do an ad for bottled water. She holds up the container and gives a sultry look at the camera before posing again drinking it seductively.

She also showed off how she’s appeared in bit parts on TV shows, sitting in a chair on the set of Teen Wolf. While her IMDB doesn’t say that she appeared on the show, she does have nine minor credits in television and short films.

Baylee is also a beauty queen, reigning as Miss California Regional. She loves to flaunt off her long blonde locks, and shows them off in a number of styles, with ringlets and curls seeming to he her preferred type. But she’s also a chameleon when it comes to her color, as in a number of pics she looks great as a brunette. She’s seen frolicking in the jungle and waters of Hawaii with a dark auburn shade that she tried out for a period of time before going back to being a sexy blonde.

Baylee claims Chris pulled a gun on her after she was partying at his house early in the morning of Aug. 30. She says she was admiring a piece of jewelry when he went nuts on her about it. She left his place, refusing to sign a non-disclosure agreement about what went down and called the cops on Chris, leading to an hours long standoff with police.

HollywoodLifers, do you believe Baylee’s story that Chris Brown pulled a gun on her?